TL;DR: I’ve decided to wean myself off of Twitter by going “write-only”: my posts there will just be updates to this blog, bridged from Mastodon via Moa Bridge. I’ll be making those posts automatically, using a tool I made for exactly this purpose. Every post I make automatically will also therefore be available on Mastodon, and I encourage you (dear reader) to follow me there if you’d like.

Going forwards, you can find me (as in, actually talk to me) on Mastodon at @yossarian@infosec.exchange1. I’m unlikely to respond to Twitter DMs anymore2.

Update: As I regularly forget to mention: this blog also has an IRC room at #enosuchblog on libera.chat.

I don’t think I need to do much explaining here: Twitter is not the right place for me anymore. Others have said it just fine already, so I’ll keep it brief: I don’t have confidence in the site’s leadership, and I’ve been concerned by a visible upwelling of reactionary content on the site.

I’m also aware that I’m part of multiple communities that provide value to the site, beyond just the value in advertising to me. Most of those communities have left or are in the process of leaving, and the value I get out of the fragments that remain do not balance out against the continued value that Twitter gets from my active account.

Still, I can’t just delete my account and be done with it: deleting my account means that the username gets recycled, and I’d prefer if that didn’t happen. I also still have friends who would like to stay (which I don’t blame them for) and people who I know read my blog by discovering my posts on Twitter.

The best solution for both of these groups (and myself) is to keep the account, but in a “write-only” state: updates to this blog will be Tweeted out automatically, but the account will otherwise cease to be active.

As mentioned above: my only remaining presence on Twitter will be automated posts, which will happen whenever a new post on this blog comes out.

These posts will look a lot like previous ones, which I’ve been doing manually: 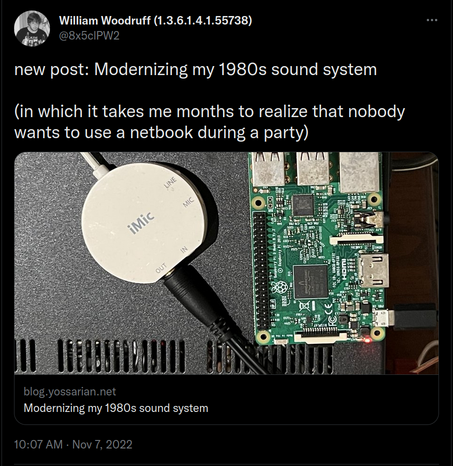 …except that they’ll be coming from a program called autopost.

Here’s the entirety of how I use autopost to automate publishing my blog posts to various sites, including Twitter:

…except that I can’t currently use it, because Twitter has neglected to give me a developer token for over a month3.

Instead, I’m using the Mastodon backend:

…and mirroring my posts via moa.party, which is a public instance of Moa Bridge.

Configuring autopost is also pretty easy, it’s just a TOML file, listing each “backend” to post to and how to get its credentials (in this case, they’re expected to be in the listed environment variables):

(As implied by the format, there can be multiple backends of each type, e.g. multiple subreddits to post to. I’m not currently using that functionality, but it might be useful to myself or others in the future.)

On its own, all autopost does is make a post to a bunch of services.

It isn’t entirely sufficient for my purposes: there needs to be a little more state, to ensure that I don’t accidentally make duplicate posts each time I use GitHub Actions to deploy my blog.

To accomplish that, I have a little bit of CI glue:

…and with that, updates only go out when the blog is updated with a new post (and not whenever I fix a typo or re-deploy for any other reason).

As I am wont, autopost is open source and available for anybody else to use via PyPI:

My hope is that it’ll help others make the move away from Twitter as well.