This post is the third in a series of posts on my music setup:

Where the last two posts were primarily about software (Navidrome and beets, respectively), this post will be more about hardware (and a bit of software to control it). Hopefully it’ll be useful to others with older sound hardware, especially those who are compelled (as I am) to avoid buying a “connected” device that’ll stop working after just a few years1.

TL;DR: I used a spare Raspberry Pi (version 3, Model B), an old USB DAC, and HiFiBerryOS with some unauthorized patches. As a result, I can now stream to my 1980s speakers from any device on my LAN, including anything that speaks AirPlay or DLNA! To tie things together, I use pulseaudio-dlna on my desktop to play music from my Navidrome instance via Sonixd. 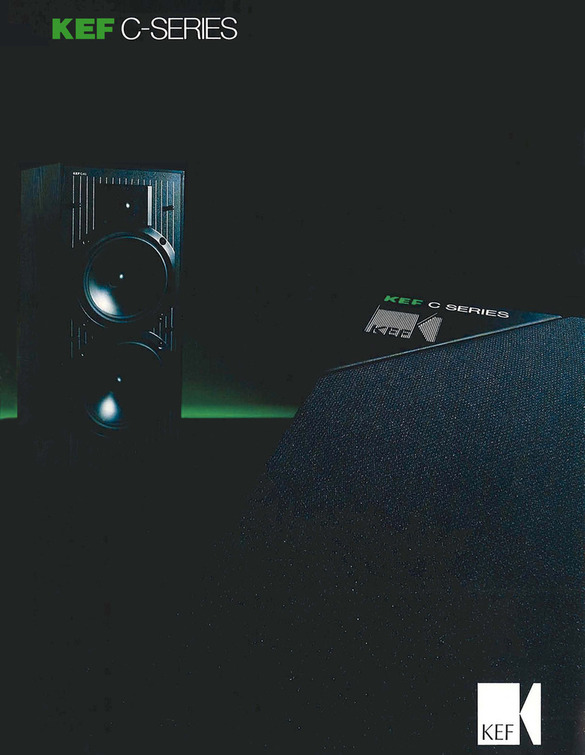 As far as speaker tech goes, these are pretty barebones: the C30s are passive monitors, with a single connector (two binding post terminals for banana plugs).

The receiver is slightly fancier: it can hop between radio stations based on signal quality (fancy!) and has support for 4 “programmable” presets. Nothing compared to modern receivers, but not the simplest either.

I have fond memories of listening to these speakers as a kid, and I’m loathe to let perfectly good2 hardware get thrown away just because it’s considered obsolete. I also run my own music server and curate it obsessively, so I thought it would be nice to have a “serious” listening setup that could stream from my server.

…and, critically, to do it all with only equipment I already own3.

Attempt 1: connect a laptop to it

This was my first thought: I could just leave a laptop on the same table as the receiver, connect it as the “aux” source, and people could queue up music as they like.

I didn’t have a spare laptop (they’re all in use), so I pulled my Asus Eee 701 netbook4 out of the closet and tried to set that up.

(This thing. Not my picture.)

The receiver has an FM mode and an FM antenna, and I happen to have a short-range FM transmitter5. It should have a range of a few dozen feet, so I can set it up in my office and have it reach the receiver without any problems. 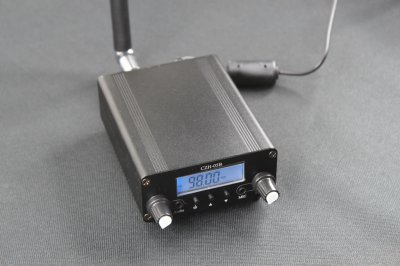 (Again, not my picture, just the same model.)

From there, I just need to send music to the transmitter: it has RCA inputs, so I can adapt those to 3.5mm and adapt to anything common from there.

This worked surprisingly well for my own purposes: I transmitted for a couple of weeks, using either my computer or my phone as the music source. Still, there were downsides:

At this point I remembered that (1) I own a couple of Raspberry Pis, and (2) that they have onboard audio. I had no idea if that onboard audio is good or not6, but surely someone has tried to use a Raspberry Pi as an audio receiver before?

Google confirms that someone indeed has: Nico Kaiser has a project that does exactly that. It even includes all kinds of goodies that are ideal for guest use, including Bluetooth7, AirPlay, and Spotify Connect support! 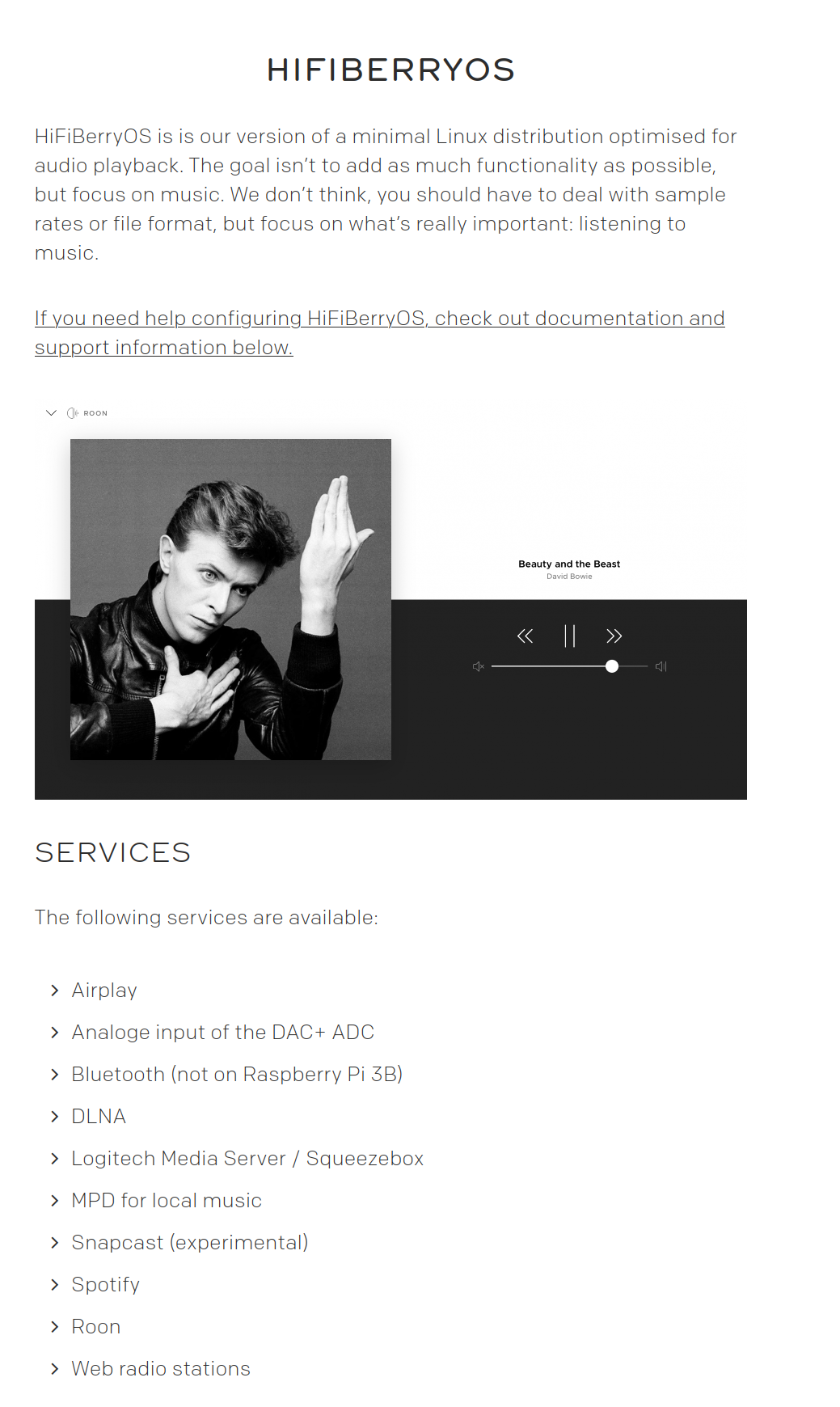 This looked like exactly what I wanted: a tiny, minimal-configuration distribution that accepts any number of sound sources and turns them all into a simple analog signal for my receiver.

To get started, I performed the standard dance of flashing an SD card for my Pi:

Once flashed, I booted the Pi and followed HiFiBerry’s WiFi configuration steps. This was incredibly nice, since I didn’t need to muck around with an Ethernet cord or special configuration files8 — I simply connected to the temporary WiFi network being broadcast by the Pi itself, gave it a name (“leben”), configured a new WiFi network, and told HiFiBerryOS to forget its own network. It obeyed dutifully, and about a minute later I had http://hifiberry.local available on my LAN9.

Critically, I did all of this configuration from my phone, which still astounds me: I’ve never had such a painless experience configuring an OS and hardware before, much less a free OS running on a dinky little Raspberry Pi.

At this point, I could actually see the Pi on my network, available as an AirPlay device: 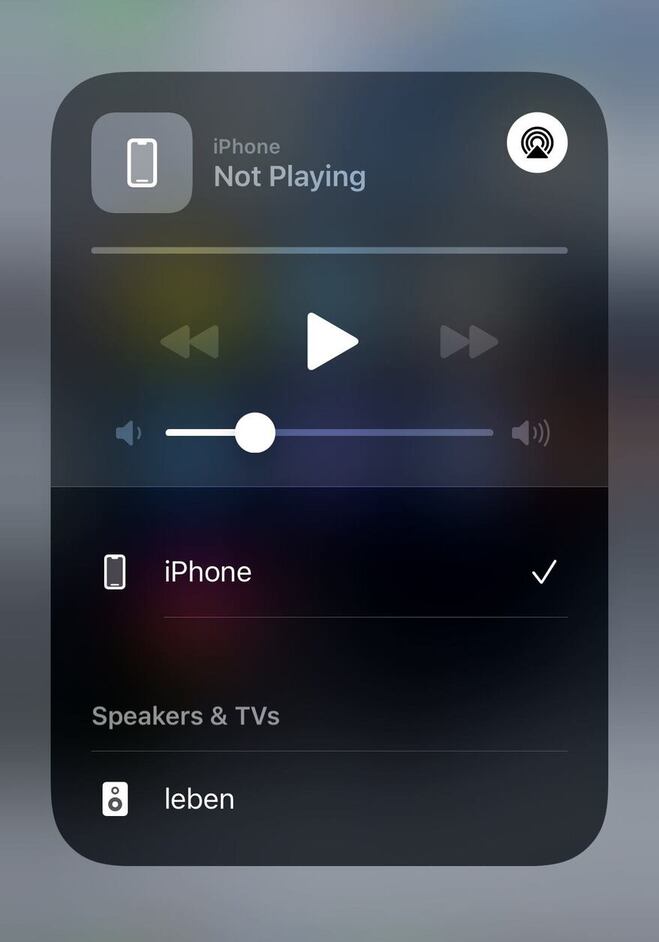 I connected to it successfully, hit play on a song, and…nothing happened.

More precisely, the Pi’s little web UI claimed that something was playing (the metadata is even correct!), but no sound was being produced: 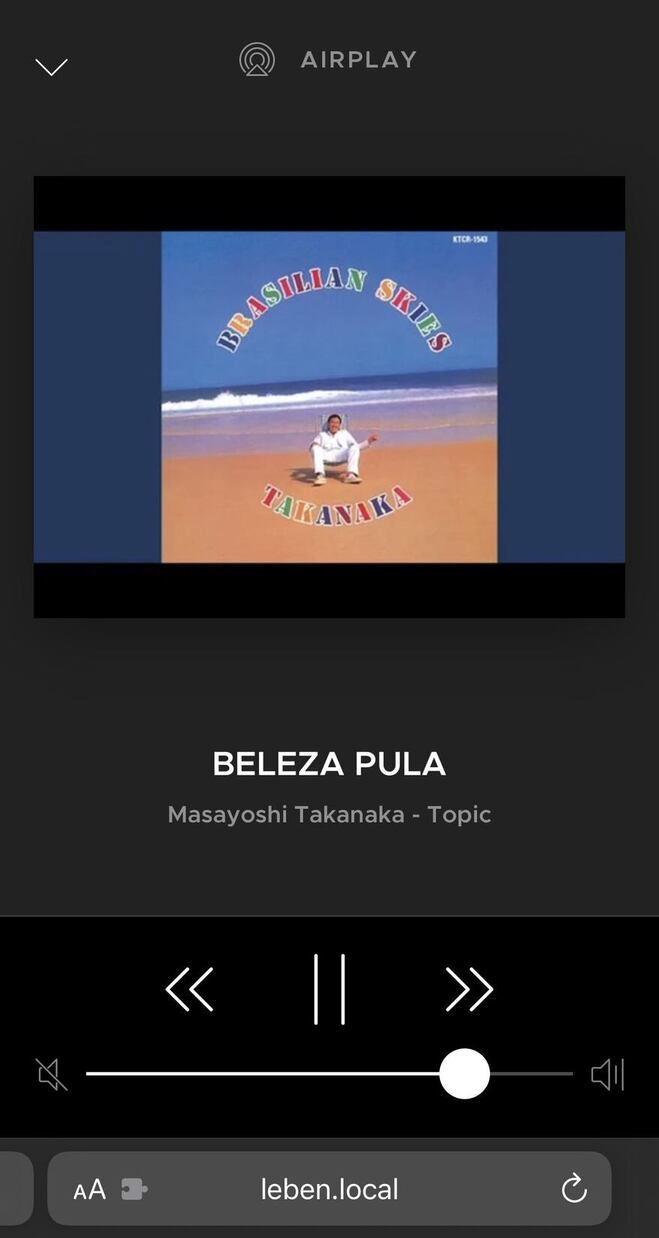 I initially assumed this was a problem with the Pi’s onboard audio (I’d never used it before), so I switched to a cheap Griffin “iMic” USB DAC that I’ve had floating around for years: 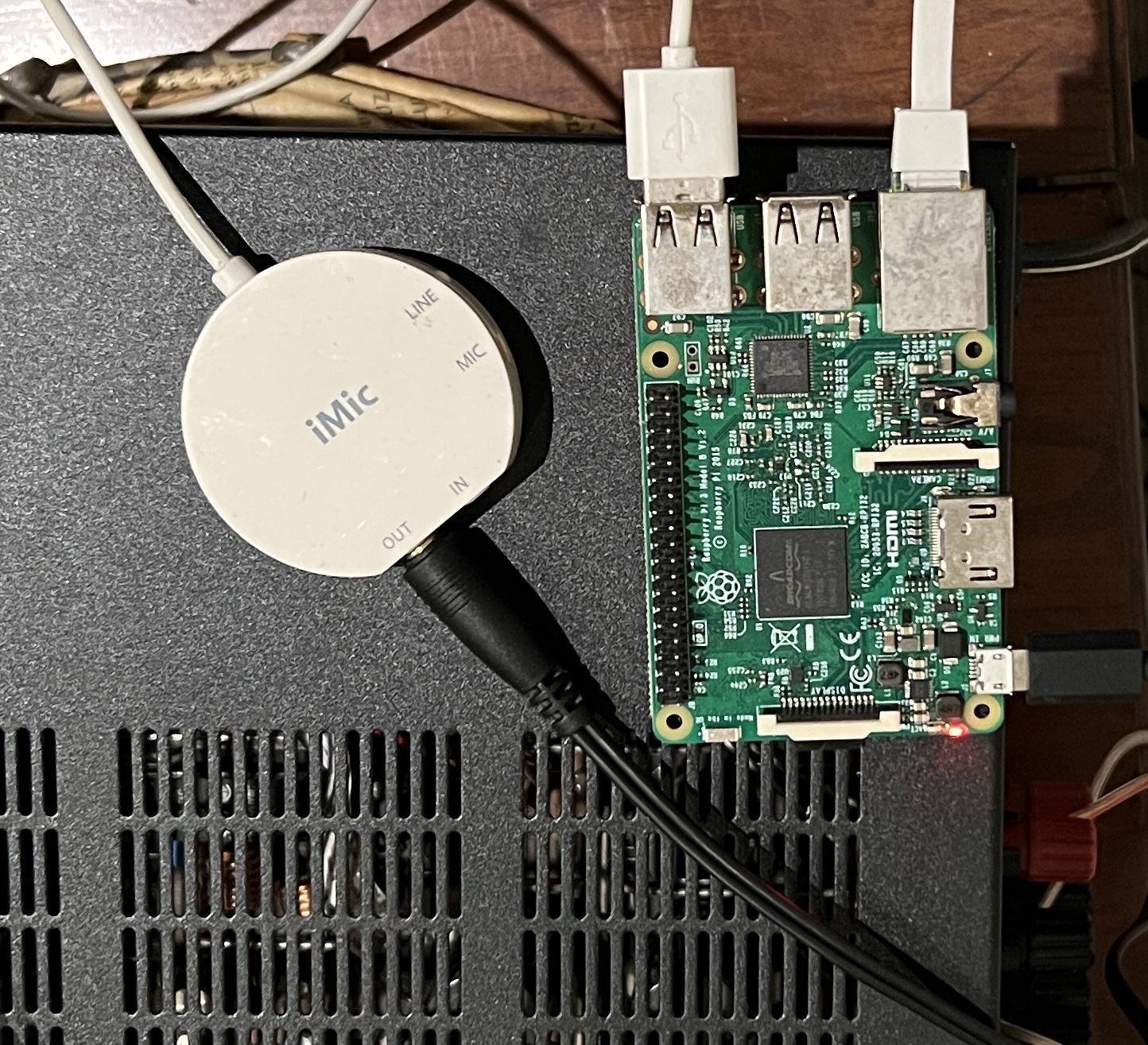 …and still no audio. I knew that the DAC and the speakers/receiver themselves were working, so it had to be something about either AirPlay (unlikely, since discovery and metadata exchange were both working) or HiFiBerryOS itself.

A little bit of Googling later, and I found the reason: HiFiBerryOS intentionally does not support either onboard audio:

This is an understandable position on their part: their revenue seems to derive primarily from sales of their own sound cards and related equipment, which they’ve designed and tested to meet their own quality and reliability standards. Supporting whatever junk people happen to plug in would inevitably require dedicated engineering resources, as well as fielding support to frustrated “customers” who haven’t actually bought anything.

As understandable as it is, I was still disappointed — I was so close to completing a sound setup without having to buy any new equipment.

I also knew that this limitation in HiFiBerryOS had to be in software, not hardware: it’s all just Linux (and probably ALSA) under the hood, meaning that USB audio should work right out of the box10. So, I resolved to hack it together.

HiFiBerryOS with a USB DAC

Fortunately for me, HiFiBerryOS comes with a SSH server installed and running by default, with default credentials of root:hifiberry.

I shelled in, and confirmed that Linux had indeed registered my USB DAC correctly:

I also confirmed my ALSA theory by checking for the “standard” ALSA command-line tools:

So, in principle, all I needed to do was figure out how HiFiBerryOS was configuring ALSA, and tell it to use card 0 instead of card 1 (which is presumably where the HiFiBerry would be, if one was installed).

Fortunately, someone on HiFiBerry’s forums had already figured this out: there’s a shell script at /opt/hifiberry/bin/reconfigure-players that contains a detect_hw function like this:

…which would normally detect their hat-style DAC on card 1:

To “fix” it, all I had to do was patch detect_hw to discover card 0 instead, which I did by greping for the “iMic” string instead of “hifiberry”: 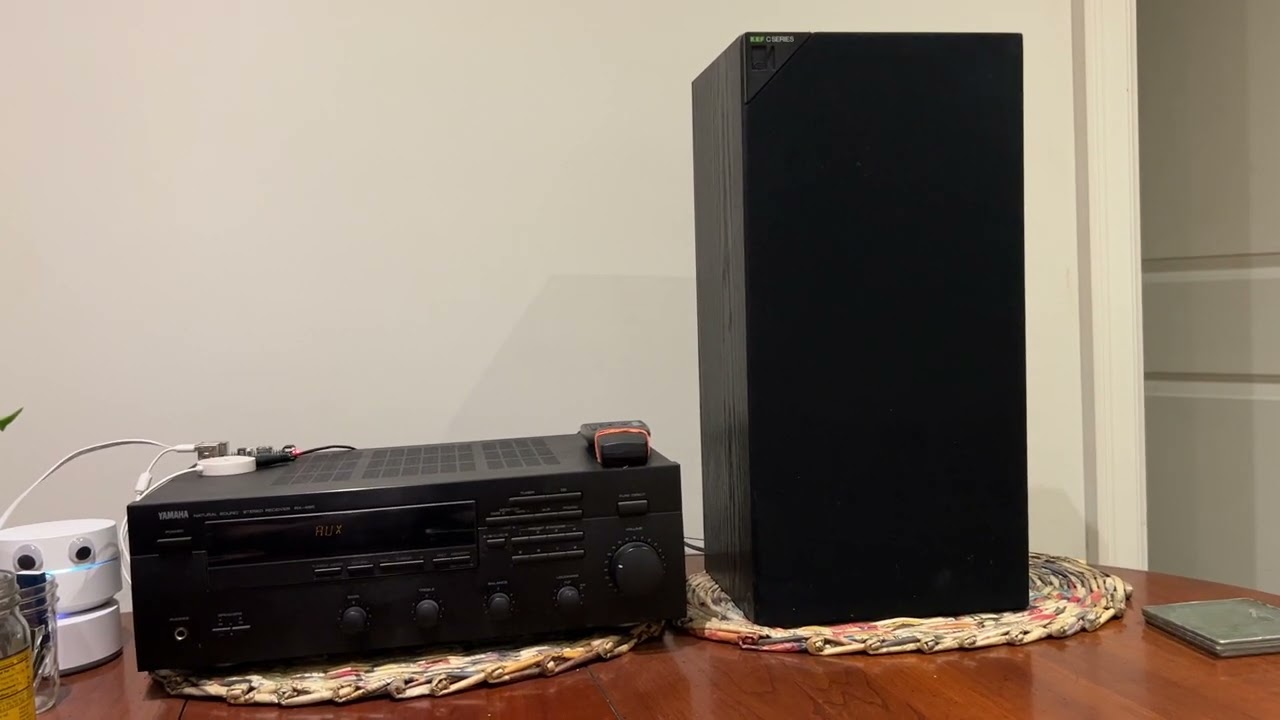 Streaming from my Linux desktop

This made me very happy: I could now stream from my phone, as could anybody else on my home LAN.

macOS also worked right out of the box, presumably via the same kind of AirPlay discovery.

That only leaves my desktop, which runs Linux (specifically, Ubuntu LTS). I already have a nice local player setup there (streaming from Navidrome using Sonixd), and I’d ideally I’d reuse it without any substantial changes.

As far as Linux audio goes, the solution here was shockingly easy: I use PulseAudio for my desktop audio and HiFiBerryOS supports DLNA streaming, so I installed pulseaudio-dlna and ran it:

This immediately discovered the Pi and added it to my PulseAudio sinks, allowing me to set it as my default via pavucontrol:

Once again, I played a song…and everything worked again! The latency between play/pause toggles is noticeable (about 1.5 seconds), but that’s not a dealbreaker for me.

As a curiosity, streaming via pulseaudio-dlna makes HiFiBerryOS think it’s receiving from a Chromium instance:

(This again doesn’t matter to me, since I don’t plan on checking the Web UI much. But it’s funny.)

Summary and next steps

To summarize, I now have:

The end result: anybody on my network (including friends and family during parties) can take over the “aux” without needing to find the cable, mess with Bluetooth pairings, &c — all they need is to be on my WiFi. An of course, selfishly and lazily, I no longer have to move 20 feet to change the music. Progress!

I’ve been working on and using open source software for a while now, but this little weekend project really drove home the value of open standards and free, pluggable, reusable work from hobbyists (like myself): I was able to do reuse hardware and software that I already owned and had configured, without having to worry about planned obsolescence or woeful security practices by random companies that feel the need to add “smarts” or Internet connectivity to their products11.

There are still some things I’d like to do:

I’ll probably do a successor post for those, at some point.

Finally, I’m going to plug the Ko-fi donation pages for the maintainers of Navidrome and Sonixd: