About a year ago, I wrote a short-ish post on concerns surrounding two kinds of conflicting views (colloquially “disagreements”). Towards the end, I suggested that categorizing disagreements as “in the language” (i.e., language-language) vs. “outside of the language” (i.e., language-metalanguage) could provide the groundwork for a formal account of faithless argumentation1.

This post will serve as the first of (hopefully) multiple elaborations on that suggestion. In particular, I’ll use this post to investigate the use of “undercutting” semantics to formally express language-metalanguage disagreements. I will also propose (without evidence) that a correct metalanguage exists, as well as make some exploratory claims about the properties of the correct metalanguage. I will also identify problems with the account as a whole.

The terms “faithless” and “bad faith” have rich philosophical and legal histories. To avoid any confusion about what exactly I mean when I use them, they are defined for the purposes below here:

Faithlessness is a property of some actor, in the context of some disagreement2, such that the actor is not committed to the metalanguage that the disagreement exists in.

Bad faith is a property of some actor, in the context of some disagreement, such that the actor is consciously committed to some contravening metalanguage.

To begin, observe that “disagreements” often3 take the form of default theories, e.g.:

Alice: Why not? Tweety is a bird, and birds generally fly.

Bob: Not this one: Tweety’s wing is hurt, and birds with hurt generally wings don’t fly.4

Represented as an inheritance network5: 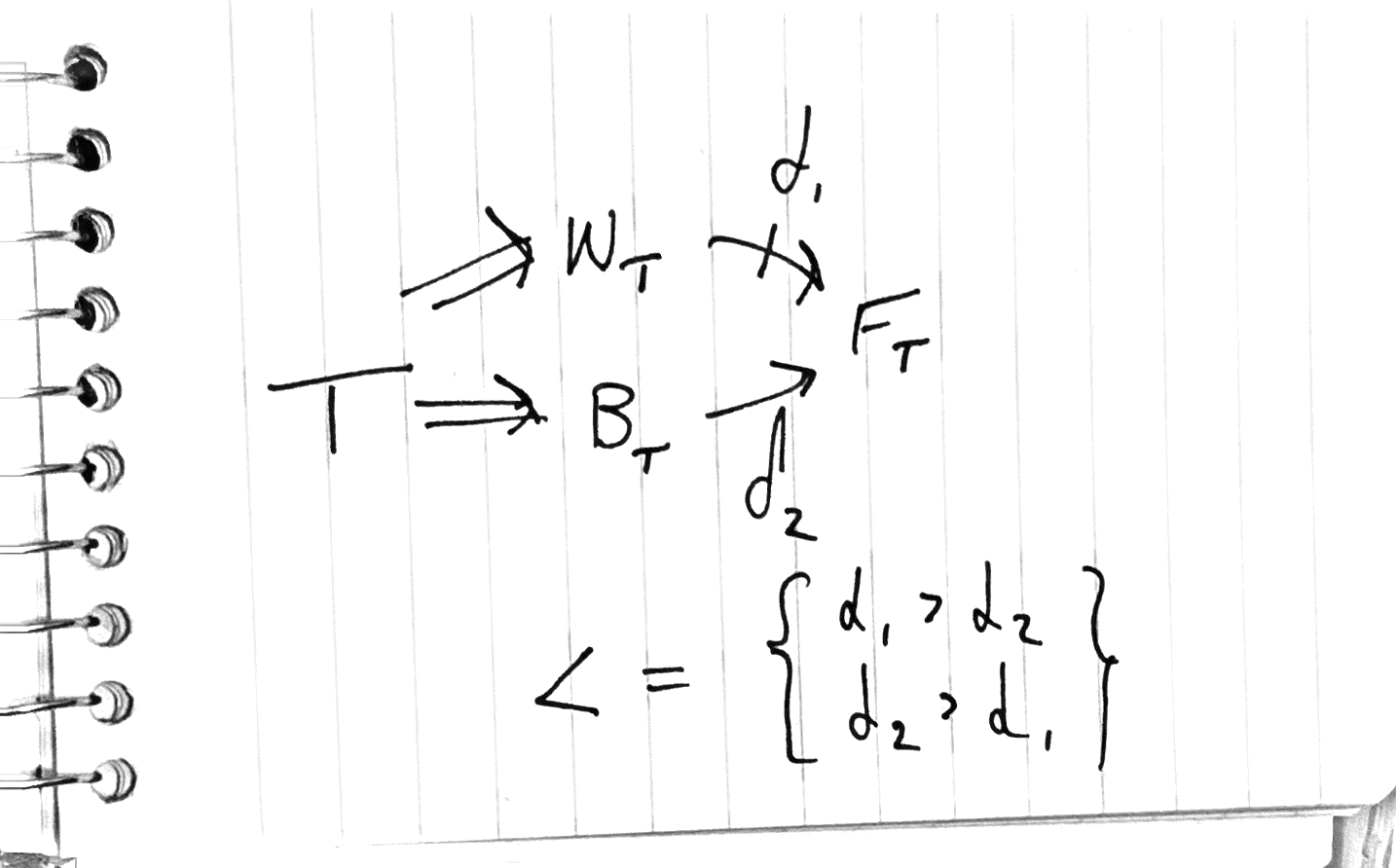 Why not represent disagreements in a monotonic logic, where indefeasability might be less of a problem? Three reasons stand out:

So we see that disagreements, or at least many interesting ones, behave like default theories.

So, how do we reason about this scenario?

Hannibal: Yes! Tweety is a bird, and birds generally fly.

Hamilcar: I don’t think so. Tweety is sick, and usually doesn’t fly when sick.

Inez’s claim doesn’t fit cleanly into our current semantics. We need a way to represent claims that, if admitted for consideration, undermine the disagreement as a whole: if Inez is right, then talking about what Tweet is or can do as a bird is absurd.

Pollock’s undercutting semantics8 offer themselves: instead of merely offering multiple routes to a conclusion (or its negation), a default can also undercut another default. Consider (a version of) Pollock’s red object:

Jordan: The chair is red because it looks red.

Katya: You can’t trust your eyes. The chair is illuminated by red light.9

Represented as a theory: 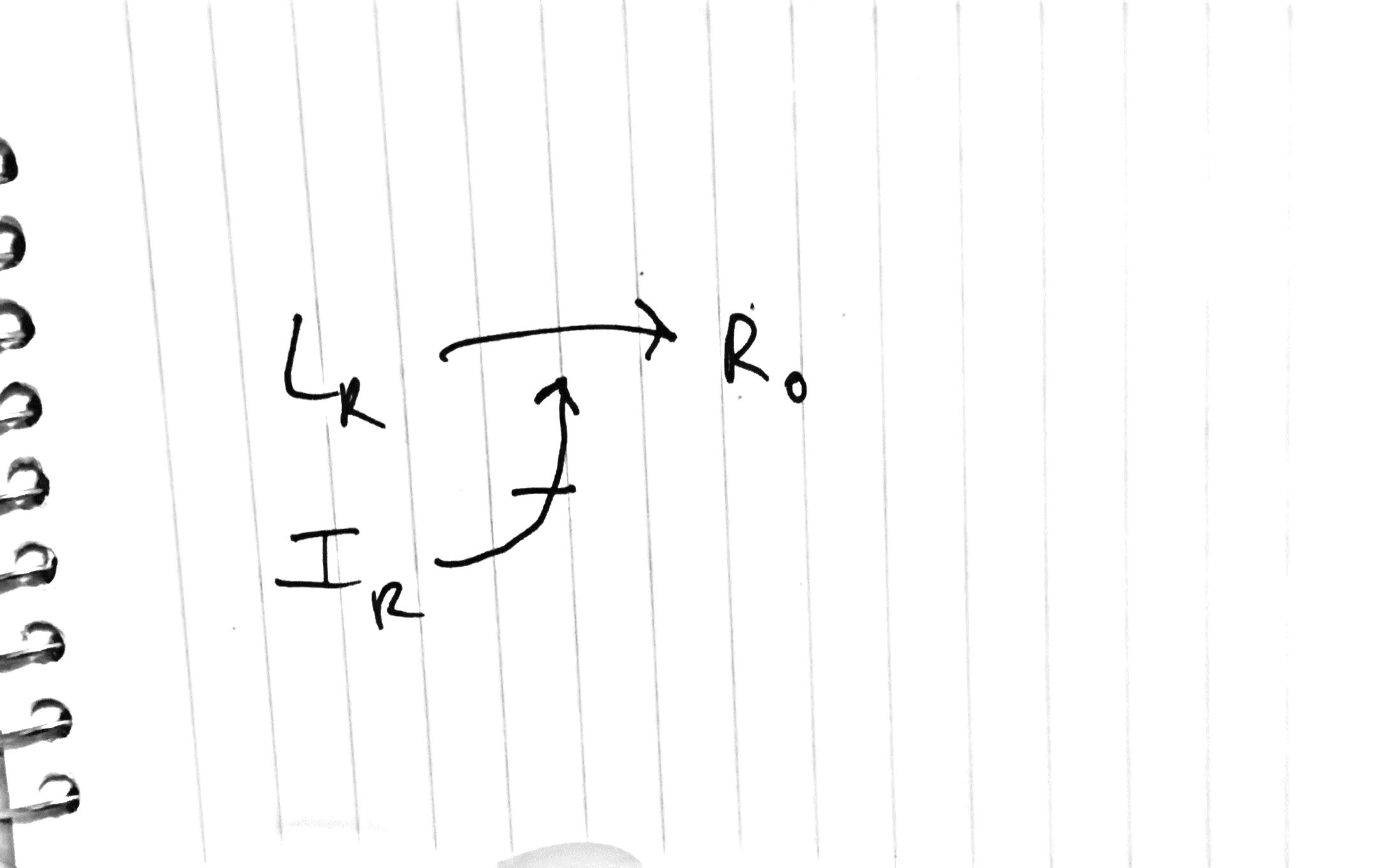 Undercutting semantics allow us to represent far richer disagreements without leaving default logic. But observe: Inez’s claim is even more substantial than a “normal” undercutting default: she doesn’t even entertain the world in which birds exist, much less the one in which things called birds might generally fly. Not only do birds not fly, but birds also do not not fly.

I propose this representation of the Inez theory: 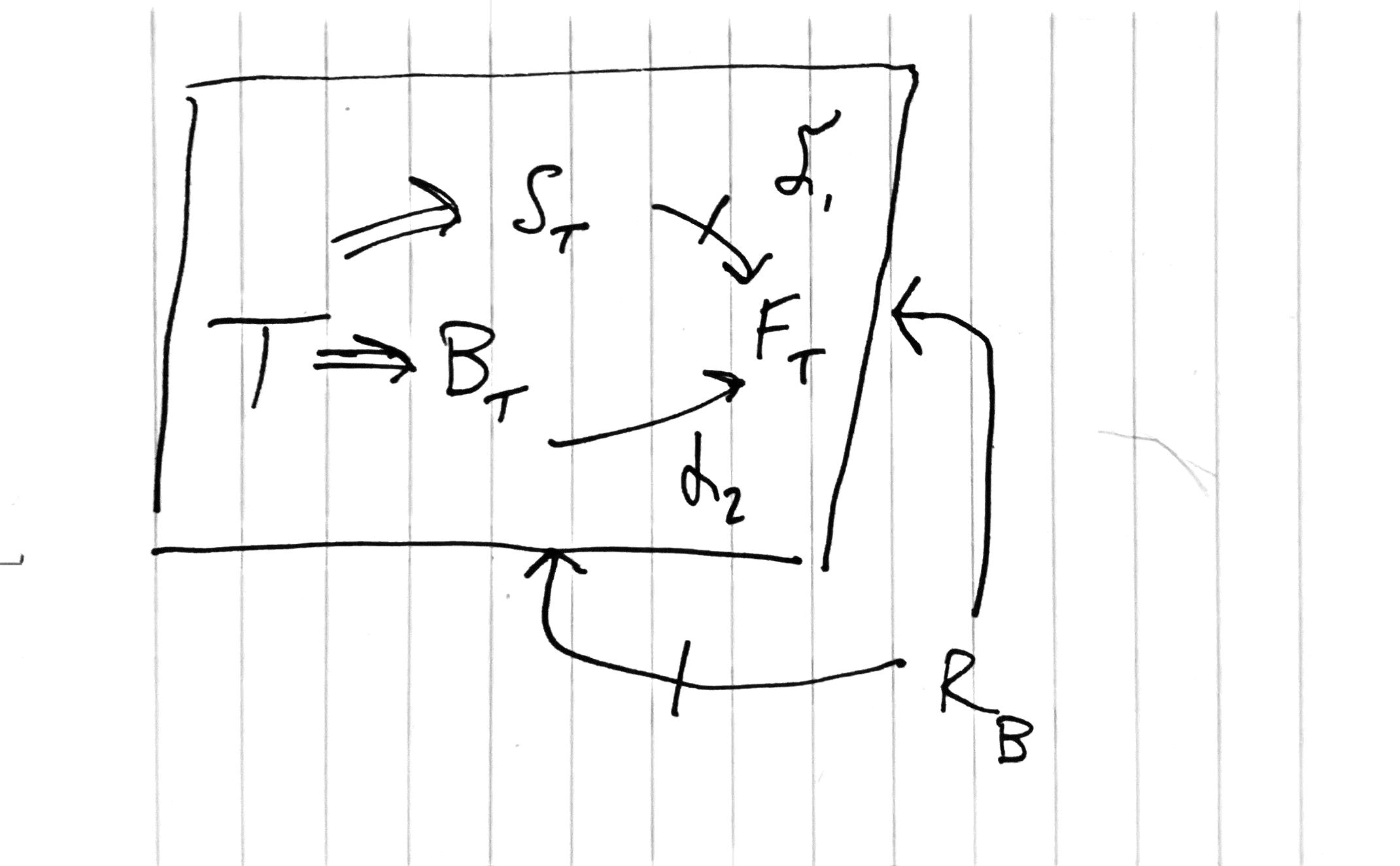 Inside the box is the language; outside is the metalanguage. Inez is not committed to the language in which birds are real; she is a faithless participant in the “disagreement”.

[…] it’s not the case that a disagreement, when vocalized, must be a direct expression of contradicting beliefs: we are content to call beliefs whose entailments conflict “disagreements”.

One “solution” is to define away metalanguage entailment: for a given set of conflicting beliefs, each side’s entailment set is composed only of entailments in their respective languages and not their metalanguages. But this is unintuitive:

What is the right metalanguage?

In the Inez theory, the answer is straightforward: birds are real. Inez is welcome to disagree about whether or not Tweety can fly, but her serious claims about the unreality of birds can be safely ignored.

Lucie: Our company will match your donations, so long as you agree on a cause.

Nicholas: I don’t think so. In order to do the most good, we should give to the local food bank.

And a faithless “disagreement” under the same metalanguage:

Nicholas: We shouldn’t think about it in terms of the most good. Let’s do what we think a good person in our shoes would do.

The fact that the second “disagreement” is faithless is not evidence for the metalanguage’s correctness. What’s more, the faithlessness of this “disagreement” does not imply that all disagreements about ethical systems are in some sense faithless — instead, it suggests that we should perform much more explicit metaethical reasoning.

But those are big claims, and I’ll justify them in another post.

Are we obligated to argue with people whose metalanguage we know (or perhaps merely think, with good reason) to be incorrect?

Nicholas: It’s plausible that buying mosquito nets might do the most good, but I don’t think doing the right thing is the same as doing the most good.

This has two nice effects: it collapses the language-metalanguage “disagreement” into a true language-language disagreement12 and, more cynically, it lets the other person know that you know what they’re up to.

Given this formalization, can we use it to fix (or at least improve) the process of disagreement?

I’m not sure. By recognizing “disagreements” that stem from alternative metalanguages, we might better preempt some of our worst argumentative tendencies.

Employed faithfully, recognition of the metalanguage(s) involved in a scenario can help us better segregate ethical claims from their respective metaethical systems. Virtually all of us agree that murder, torture, and greed are wrong despite widely varying personal ethical views; it might be more productive to engage more directly with the objects of “good”, “bad”, “right”, “wrong”, &c than to waste time finding edge cases in individual beliefs.

There are many things that could be elaborated on in this post, but it’s already at the inflection point of “too long to ask my friends to suffer through” and “too thinly spread.”

Instead, I’ll just point out a few things:

Kant and Popper, among many others, offer parallel constructions. I’ll summarize and contrast them in a future post14.