As I mentioned in my very first post, I do a lot of configuration. In particular, I have quite a few bash functions, aliases, and environment settings that I update regularly to reflect my needs.

To synchronize my configurations across all of my computers, I use a git repository and a long and not very pretty bash script that essentially maintains clones of the dotfiles repo and copies files and directories from it depending on the needs of the host system.

As a result, updating a given host’s configuration only requires a single command:

Unfortunately, this only performs a file-level synchronization of configurations. This is perfectly fine for programs that are run frequently (like git and feh) or that poll for their configuration files while running, but it presents a problem for bash itself, which normally only reads ~/.bashrc (and/or ~/.bash_profile) once per session.

Until now, my solution was a shell alias I named bashreload:

This works, but only for a single shell at a time. In other words, reloading my bash configuration across my (very numerous) terminal sessions would require me to go to each and manually type bashreload, wasting time and effort to do something that should be instantaneous and uninvolved. 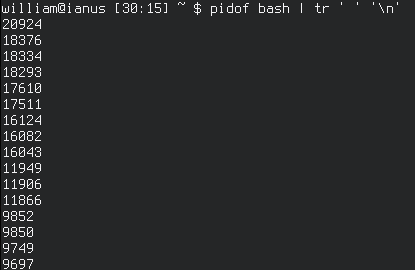 To solve this, I began to experiment with good old Unix signals, which are actually very easy to manage with bash’s trap and kill builtins:

Knowing this behavior, I whipped up an initial solution in my ~/.bashrc:

However, as I soon learned, this has a very bad side effect. Because the allreload function collects the PIDs of all bash processes, including non-interactive ones, it ends up sending SIGUSR1 to non-interactive bash instances. What is bash’s default SIGUSR1 behavior, I hear you ask?

When untrapped, a bash process that receives SIGUSR1 is immediately killed.

As a result I ended up killing several non-interactive scripts, one of which was apparently vital to Compiz and whose death caused all windows on my left monitor to stop responding.

This presents a major problem: How can interactive and non-interactive bash processes be distinguished externally, with no access to the normal $PS1 or $- variables?

Ultimately, as far as I can tell, the above is simply not possible. We could produce a similar effect with an IPC system other than signals, but the results would almost certainly be ugly, difficult to maintain, and error prone.

I was about to give up and revert to my original system of running bashreload on demand when IRC saved me once again:

SIGURG (which is defined in POSIX.1-2001 and is normally used to signal out-of-band data on a TCP/IP socket), has a default action of “Ignore” according to signal(7), an action that bash appears to respect. This is confirmed by its absence from terminating_signals[] in the bash source tree. 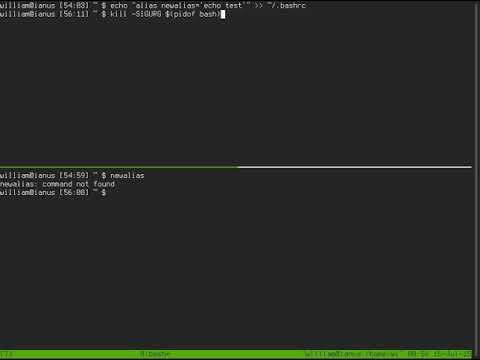 After a little bit of tinkering, I can now:

Of course, this still isn’t great. Unix signals are slow, and using a signal (SIGURG) to do something completely orthogonal to its original purpose probably isn’t a good idea (especially if bash suddenly adds it to its terminating_signals[] array). Then again, this is bash we’re talking about - performance isn’t going to be great in the first place, and it works!