The Dismal State of HTML

For better or worse, the words “Internet” and “Web” are essentially synonyms to non-programmers. Though they may use protocols other than HTTP and services presented in mediums other than HTML, a gateway to those protocols and services is almost always available in the form of a good old (X)HTML website. In other words there is a lot of HTML out there of, as we will see, extremely variable quality.

“Why are HTML errors a problem?,” you might ask. “If it looks like it renders correctly, why should we care if it isn’t strictly valid?”

Well, here are some good reasons:

So, how bad is the situation out there?

To find out, I had to gather a list of sites to test. There’s no point in testing small-traffic sites or personal sites, as they’re more likely to be static and maintained by a single person. To see how prevalent the problem is, I had to test the sites of companies and organizations that have ample resources available to them - entire teams dedicated to their website and online presence.

With that in mind, I chose two datasets: the consumer websites of the Fortune 500, and the global top 500 sites by traffic as ranked by Alexa.

Scraping Alexa’s rankings was fairly painless, thanks to a quick script:

Scraping the Fortune 500 site proved to be more trouble that it was worth, so I went with a secondary resource, which was also scraped with another quick script:

Then, a little post-processing was in order:

After filtering, therefore, we’re left with 981 good sites to test against.

I was originally going to validate each site’s HTML using the W3C’s Markup Validation Service and a Perl module, but I ended up getting IP banned for “abuse” (despite not exceeding their posted rate limit).

I ended up downloading and running my own copy of the W3C’s “Nu” HTML Checker, which made scripting a bit easier:

Bundled up in another quick script:

Finally I had to to remove ‘unknown’ results, caused whenever vnu.jar crashed or a site timed out (both of which happened occasionally). Excluding those, I was left with 914 complete results to interpret.

Upon initial inspection, I had to eliminate a few results with extraordinarily large error counts after realizing that these sites were sending gzip-compressed HTML despite the lack of an Accept-encoding: header. Several sites with fake error counts over 5000, mostly originating in China, had to be excluded. This reduced the result count to 910.

The loser with the most real HTML errors was… Microsoft!. At 4324 errors (not counting warnings), Microsoft’s 415KB index.html) contained an error every 96 bytes.

Second and third place go to Whole Foods and Rakuten with 2835 and 1950 errors, respectively.

The winners were few and far between, with only 13 sites (~1.3% of the tested group) containing absolutely no errors. Among them were several fairly large sites, including google.cn (but not the main google.com), stackexchange.com and bbc.co.uk.

(The 9 sites with error counts greater than or equal to 1000 are not included, due to sparsity.) 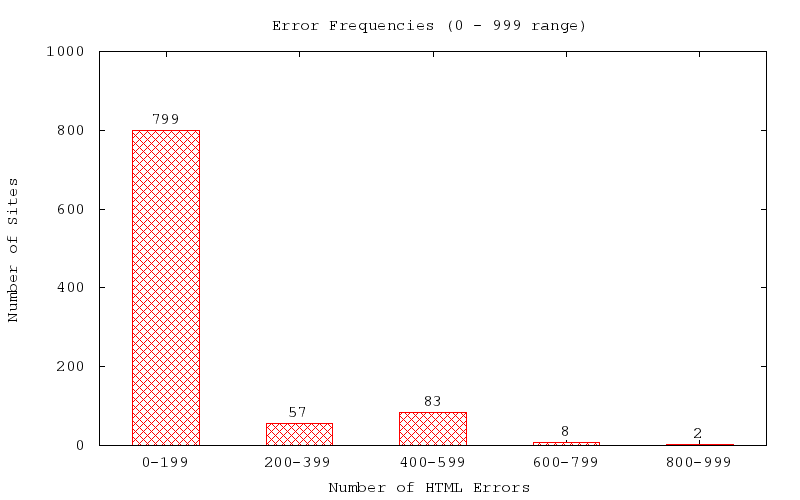 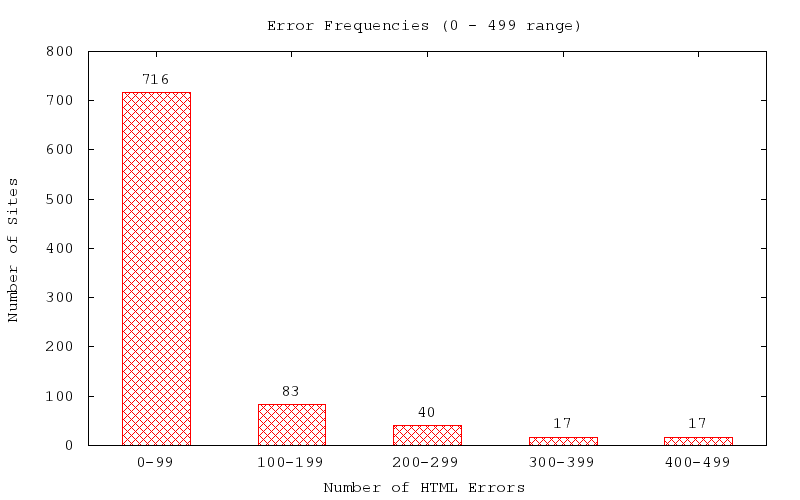 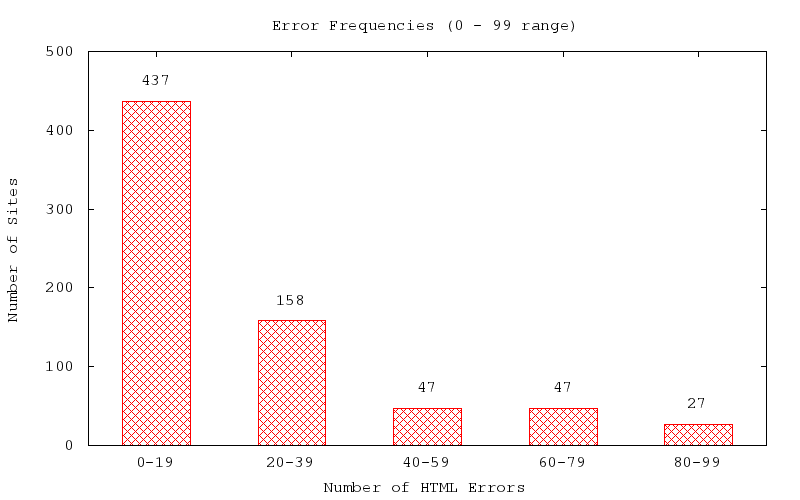 First, I couldn’t find a good way to scrape the websites of the Fortune 500. Then, I got IP banned from the W3C’s online validator and had difficulty building both the old and new HTML validators from source. When I finally turned to the Nu Validator releases, I had yet more problems with vnu.jar crashing and attempting to decode raw gzip data without first decompressing it. All of these things, combined with the fact that these websites are in constant flux, make me less than certain about the relevance of the data collected.

On the other hand, I have a blog post to finish. The non-excluded data is fairly revealing in content, demonstrating that nearly half of all responding sites have at least one error (and normally a fair deal more than that). Also interesting is the small spike in sites with anywhere from 400 to 599 HTML errors, possibly suggesting a common usage of a generator with endemically faulty rules or syntax.

It’s worthwhile to note that, while I only visited a few of these sites in my actual browser, their prominence would suggest that virtually all render and display correctly on a variety of platforms in spite of any errors in markup. This is both a testament to the resiliency of HTML, and to the finesse of web engine developers everywhere. It’s also worth nothing that these numbers only indicate HTML errors, not errors in each site’s CSS and JavaScript. I am confident that a more in-depth analysis would reveal the following:

I feel like I’m repeating common sense statements here, but these kind of truisms are important to keep in mind whenever you’re the one making a new site, or even just a new page on an existing one. Your opportunity to validate your pages after generation (or even switch to a more correct generator) may seem like a waste of time, but it pays off in the long run for everybody.

If you’d like to look at the data yourself (or try your hand with a new dataset), I’ve posted the scraping scripts above and a link to the release page for vnu.jar. In addition, here is a zip archive containing the data I collected, as well as the gnuplot scripts and .dat files used to generate the bar charts. It also includes an ad-hoc script for interpreting the data, as well as a copy of vnu.jar.

I am painfully aware of how hypocritical it is to complain about broken HTML on a blog with errors of its own. I think it’s worth noting that my blog has a single HTML error (fixable if I can be bothered), while the front-facing sites of Fortune 500 companies with entire teams dedicated to their web presence regularly have over 100.