Setting up Navidrome with Nginx as a reverse proxy

This is a quick how-to post, since I struggled to follow some of the recommendations of individual users on the Navidrome subreddit. Hopefully someone will find it useful.

TL;DR: Jump to this section.

Many years ago, I ran a Subsonic instance for myself and my friends. Back then, Subsonic was pretty incredible: it “just worked,” assuming you had a few basic runtime dependencies (namely the Java Runtime and ffmpeg).

Even back then, however, there were ominous signs on the horizon: Subsonic’s author made new releases proprietary, and community maintained forks churned through names more than they did features1: Libresonic, Airsonic, Airsonic-Advanced?

At the same time, the Foosonic web UI began to show its age: the original Flash-based player had to be replaced with an HTML5 player, and the <frame> based interface performed increasingly poorly on modern browsers.

After a hard drive disaster on the machine that my instance ran on, I gave up on Subsonic and its forks entirely and did my own thing for a while. That also became a hassle, and I became a (recalcitrant) Spotify customer.

Fast forward to 2022, and I’m done with Spotify2: no matter what I do, it only recommends me the same half dozen artists. I miss curating my own music without The Algorithm (un-)helpfully placing its thumb on the scale.

A friend recommends Navidrome to me. He describes it as a Subsonic server, which makes me think that’s another (maintained) Subsonic fork. But no: it’s a completely separate codebase, one that supports the REST API “standard” that Subsonic and its offspring use. That’s the best of both worlds: a new codebase (including a new frontend) with none of Subsonic’s baggage and compatibility with the large ecosystem of Subsonic clients.

Installing it is (blessedly) simple, with just a single Dockerfile and two directories (one for server state, and one for my music):

That’s it. Five seconds later, Navidrome was already indexing my music, listening on my server’s local host, and waiting for me to configure a new user (and admin) via the web UI. The end result is very nice: 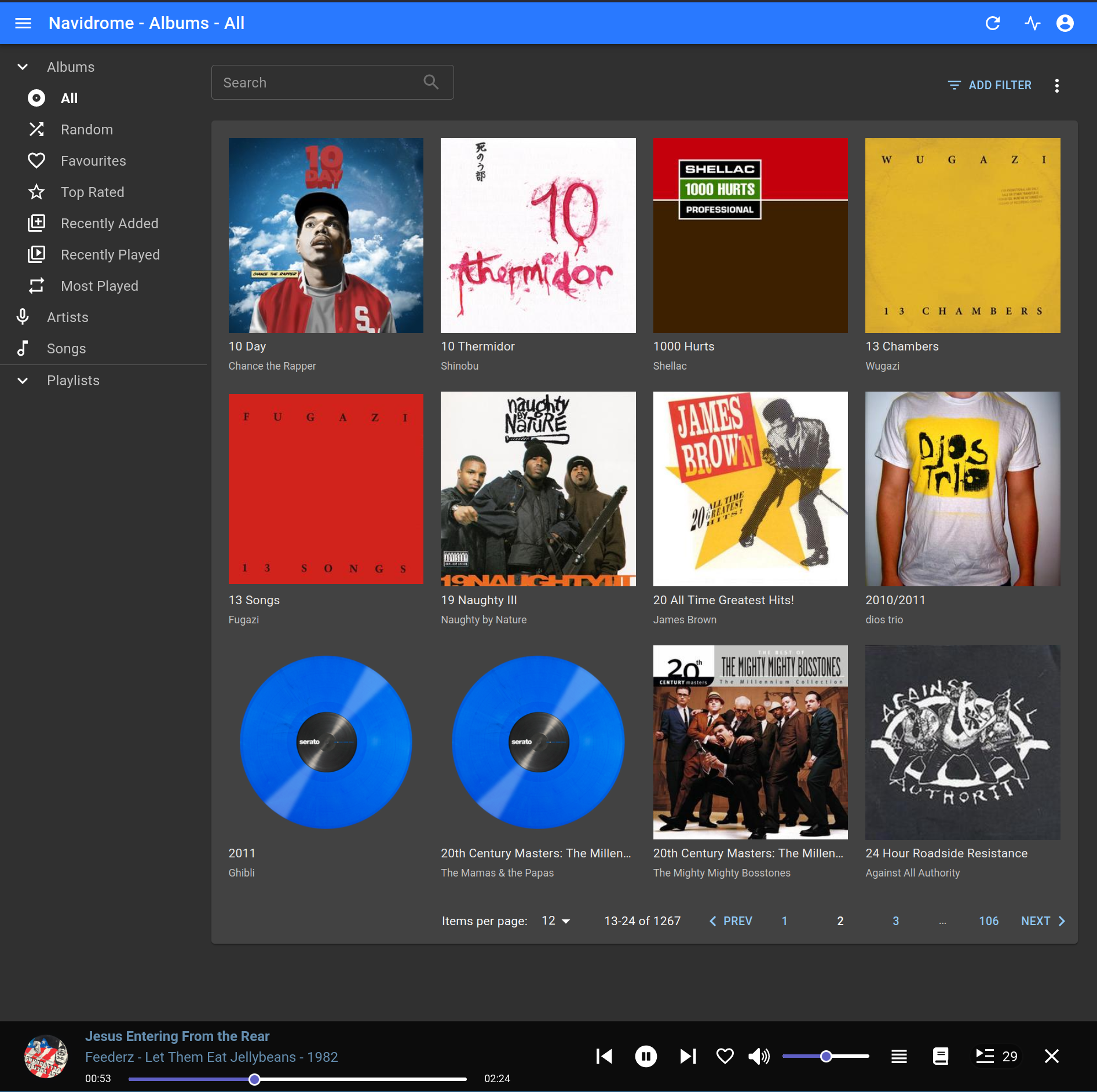 This is perfectly sufficient for local use, but I want to replicate the setup I originally had with Subsonic: a reverse-proxied service poking out from one of my domains, complete with HTTPS.

I prefer URL routes to subdomains (because I’m too lazy to update my Let’s Encrypt configuration), so this is my ideal setup:

On the Navidrome side, I only needed a single configuration change: I needed to set ND_BASEURL: /navidrome in my docker-compose.yml, telling Navidrome to base all URLs on /navidrome instead of /. See the full YAML above for the entire context.

On the Nginx side, all I needed was a new location block under my HTTPS server spec, matching all patterns under /navidrome and passing them onto the underlying server:

(I’ve included the HTTP server block as well, just to show the HTTP to HTTPS redirect.)