This is a short writeup of how I got SimpleCov coverage reports working across multiple Ruby processes, specifically when created through Kernel#fork.

As part KBSecret 1.3 (soon to be released!), I’ve significantly refactored the way in which KBSecret executes commands (e.g., kbsecret list and kbsecret new) as part of a larger effort to simplify the codebase and improve performance.

KBSecret now executes commands “in-process,” meaning that it does not exec or otherwise spawn a fresh Ruby interpreter to handle the command. This has two important consequences:

However, KBSecret commands still behave as if they’re in complete control of the process — they call exit and abort on error conditions, fiddle with I/O, and do all sorts of other things. This makes testing difficult, especially when the tests are of error conditions — calling exit in the command takes the entire test harness down with it.

Testing commands with fork and pipes

fork is the conceptually simple solution to the problem of testing programs that terminate or otherwise modify the process state. Ruby even provides a nice Kernel#fork method that takes a block:

However, fork comes with its own challenges — now that we’re in a separate (child) process, we no longer have direct access to the child’s standard I/O descriptors. Since commands communicate with the user through stdin, stdout, and stderr, we’ll need to introduce a pipe for each:

This works as expected:

So far, we have commands running in their own processes for the purposes of resiliency/testing failure conditions. That’s cool, but what we ultimately want is coverage statistics from those child processes. How do we get there?

Well, because we’re using fork, our child processes share the same library context as their parents. That means that anything we get a copy of anything required or loaded pre-fork, including SimpleCov’s state.

To take advantage of this, we need to modify our coverage preamble slightly, from something like this:

We also need to add a tiny bit of code to our fork block: 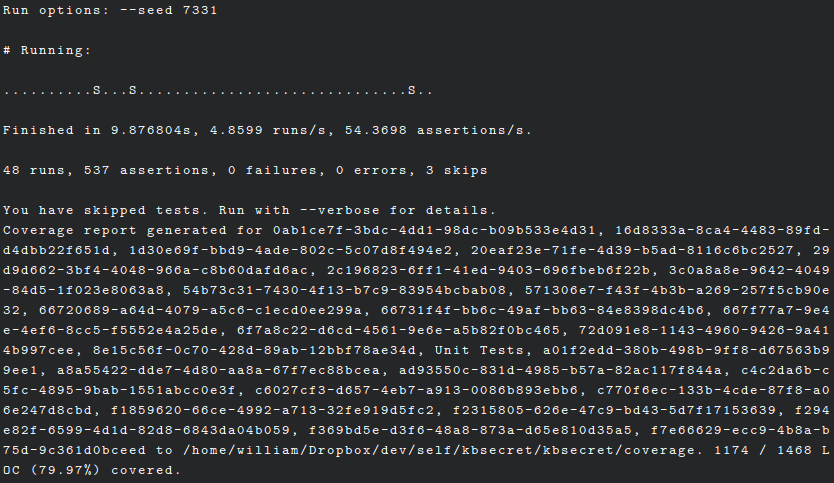 Each UUID above is a separate process.

This technique works great locally, but not so great on remote services like Codecov. To get properly merged multi-process coverage results on Codecov, you’ll need to do some additional post-processing.

This handles uploading to Codecov, so there’s no need to require "codecov" in your helper.rb or equivalent file.

Check out KBSecret’s repository for a working example.