I often reference the manpages when giving a development presentation or talk, but I’ve only recently come to realize how few people are both comfortable with the man interface and adept at discovering information through it.

This post is my attempt to share some of the tricks and techniques I’ve picked up over years of reading manpages.

The manpages (short for “manual pages”) are the oldest and longest-running documentation collection on *nix, stemming back to the first edition of the Unix Programmer’s Manual in 1971.

On a modern system, the man command is the most common way to access the manpages:

Because the manpages were originally published on paper, they were (and continue to be) typeset with troff on most systems. Today, the man command (and other manpage readers) invoke troff internally and pipe the output to the user’s pager (like more or less).

In fact, a very simple manpage reader (which only works with section 1) can be implemented with just three commands pipelined together:

Apart from their simplicity and adherence to the UNIX philosophy, man and the manpages serve a number of important roles:

So, let’s move on to some techniques.

One of the simplest things you can do to enhance the readability of manpages within man is to colorize the pager’s output: 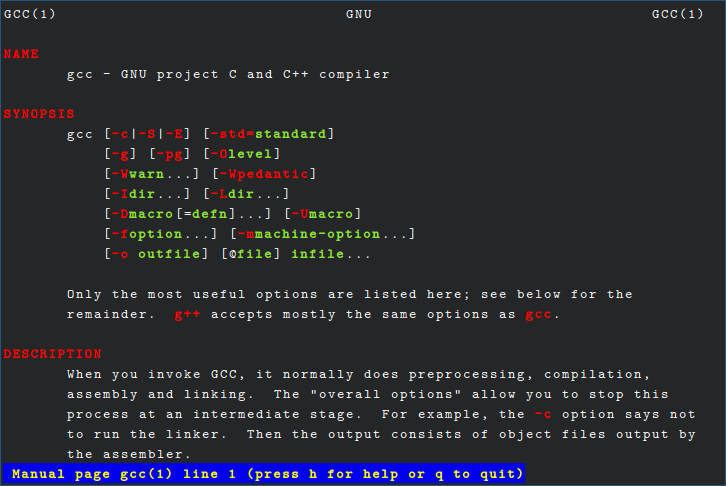 In less, this is accomplished by setting the LESS_TERMCAP_* environment variables to your preferred ANSI color codes. Here are the variables you can set:

You may be able to set others corresponding to the termcap capability names, but the variables above should cover all of your manpage needs.

By way of example, here is the bash function I use to colorize my manpages:

Note that you don’t need to use escape sequences as above — tput will work just fine.

I mentioned some of the big sections above: 1 for system commands, 2 for system calls, and so on.

90% of man lookups will be in those three, but there are a few lesser-known sections that can also be useful:

Like colorization, searching is more of a general less feature than one specific to man. That being said, less’s searching and navigating features can make browsing the manpages a much faster and more pleasant experience.

Searches in less can be forwards or backwards, using the / and ? commands respectively. The search syntax is mostly POSIX ERE, but with some additions (man less has the details!).

For example, to find the first instance of “x86” in man gcc (watch the bottom of the screen for the search prompt): 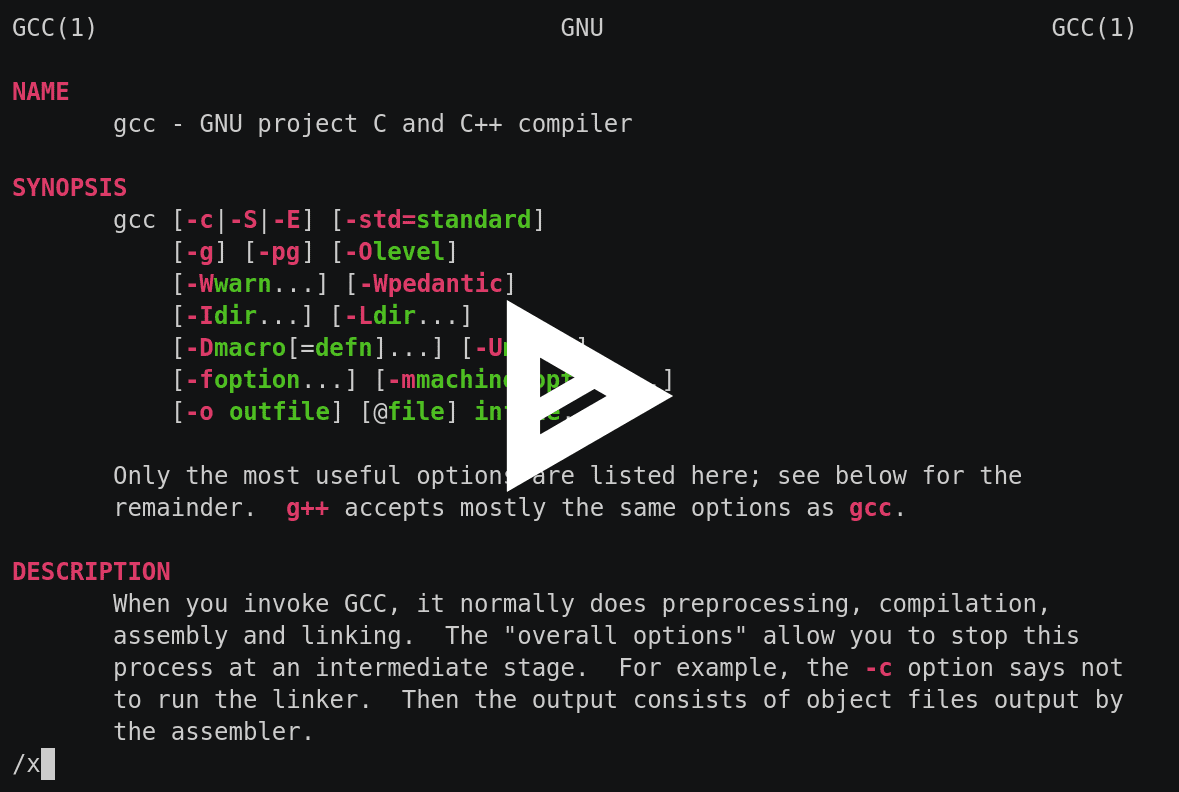 Observe that instances of the search term are highlighted with the standout colors from before.

Once a search term is entered, its results can be navigated via the n and N commands, which move forwards and backwards in the results list respectively. For example, going through all of the results for “Windows”: 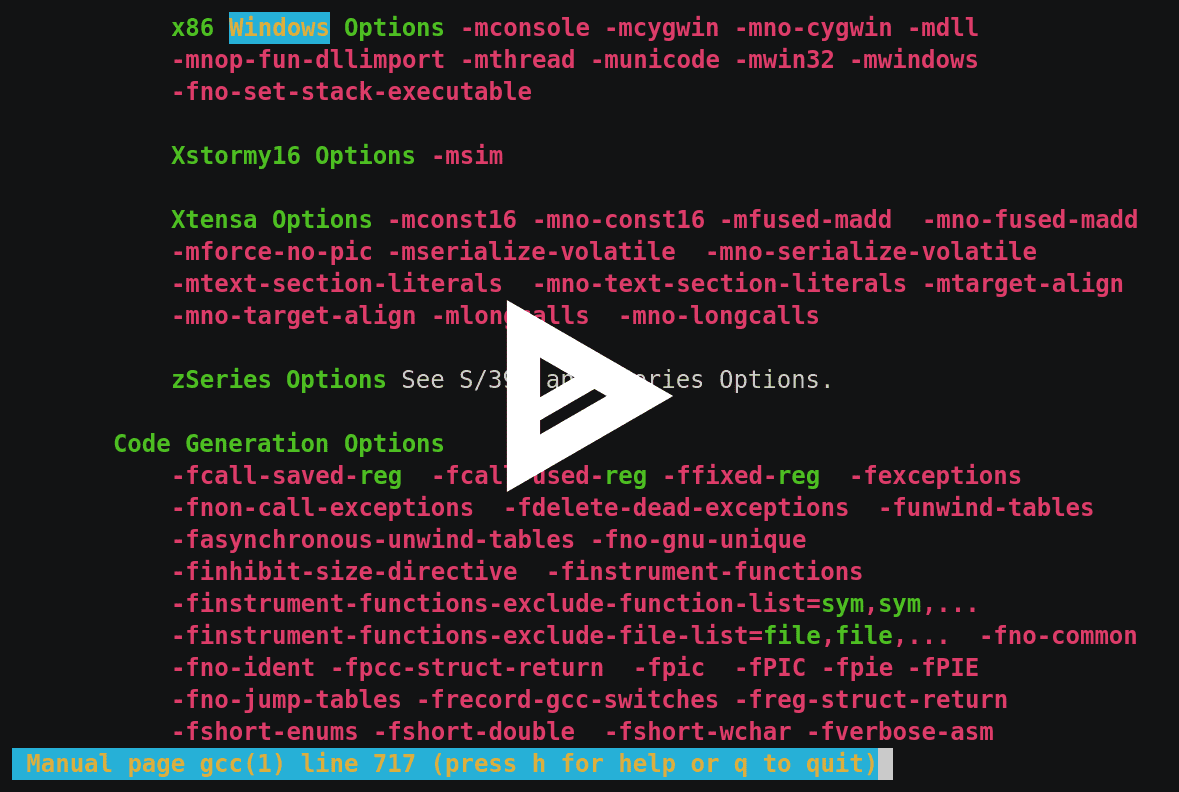 When the last result has been jumped to, the statusbar changes to “Pattern not found”. Once that happens, as in the video above, previous results can be returned to by hitting N.

Even this can be simplified: the & command can be used to display only lines that match the given pattern. For example, retrieving every line that contains either “ARM” or “ABI”: 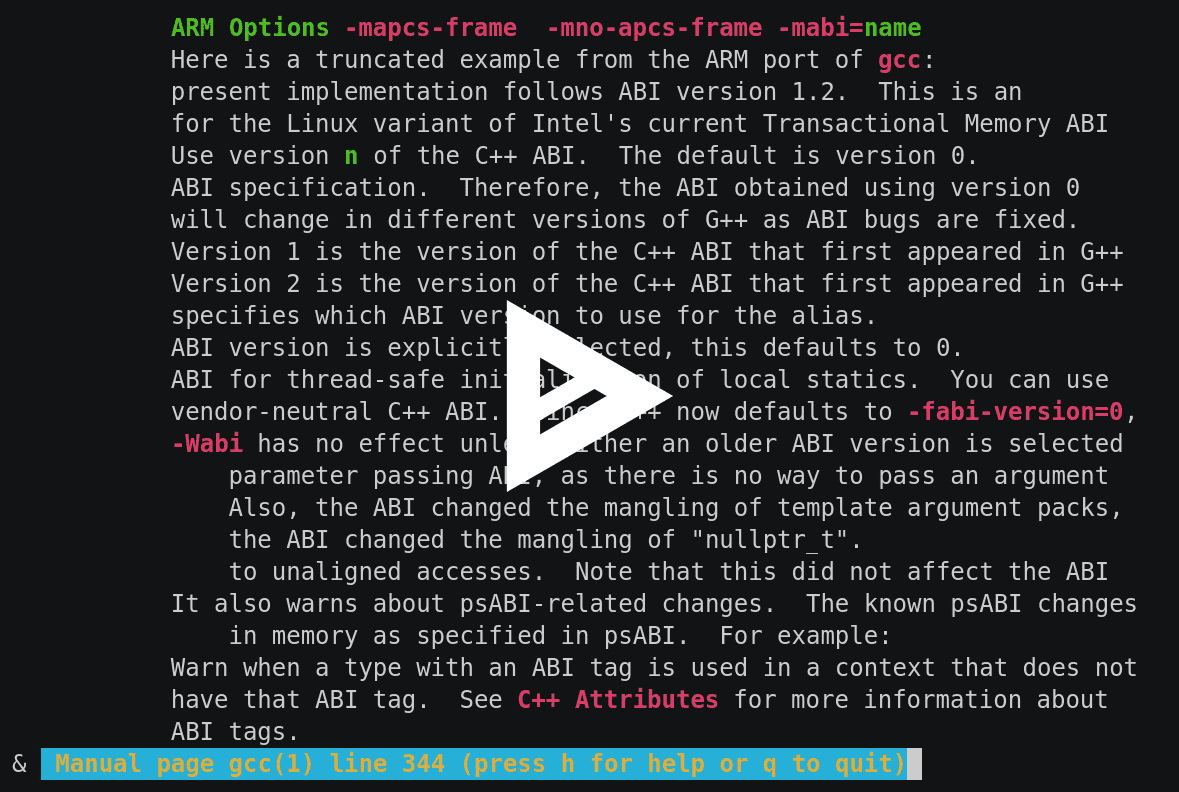 The effect is more dramatic when searching for the definition of a flag (in this case -D): 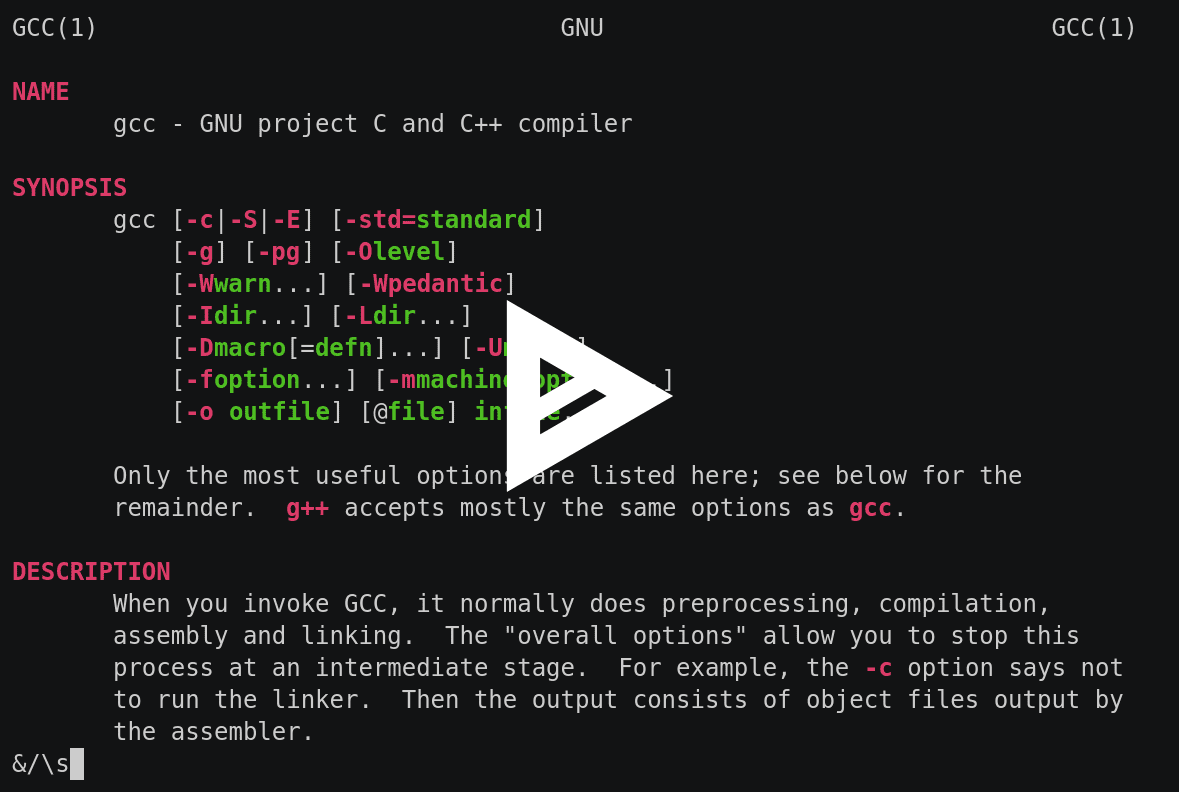 These commands are just the tip of the iceberg — less supports searching multiple files at once, jumping around scopes (opening and closing parentheses, braces, brackets), and marking the current location for later return. Each of these is documented on the help screen, which you can get to in any less session via the h command:

Before picking up these tricks (especially searching), the manpages were an item of last resort for me: I would search the internet or ask a friend, with mixed results. I had no real idea how to use less, and would just clumsily page around until I found what I was looking for. More often than not, I would give up entirely.

At the end of the day, the manpages (and the man interface) are not perfect — there’s no hyperlinking or real cross-referencing, and the entire corpus is written in a 45+ year old typesetting language designed for physical output, not display in a virtual terminal.

That being said, they’re a fantastic initial resource for pretty much anything concerning your system — they remain up-to-date (unlike blogs and articles), they’re accurate and concise, and they’re very UNIX-y (text files and pipelines!).

This post was discussed on HN; a response by ‘djeiasbsbo includes some additionally useful tricks and advice.