As of today, my personal site is finally encrypted, with a Let’s Encrypt certificate: 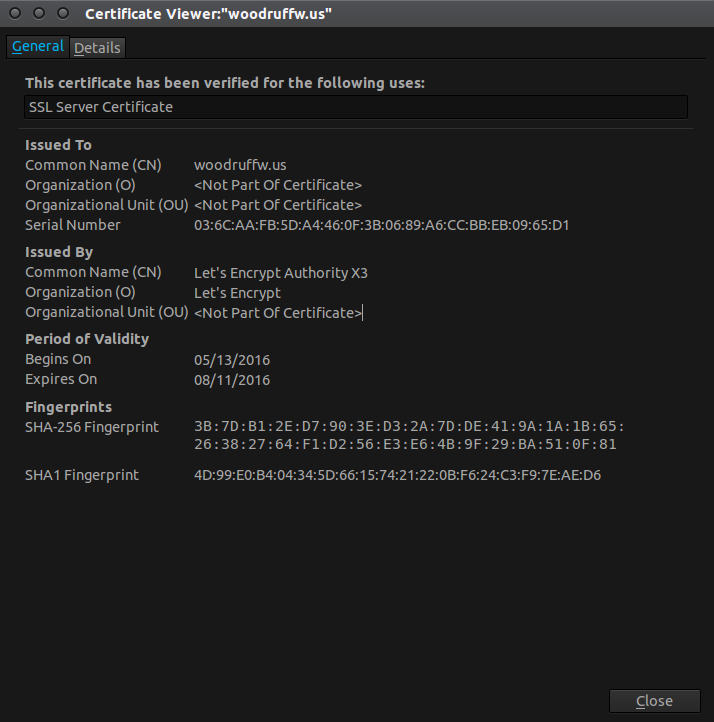 I was invited to LE’s beta a little over a year ago, but had shied away from HTTPS on the (completely incorrect) assumption that it would require additional maintenance and configuration time. Seeing how my personal site is 99% static and hand-written, I didn’t feel any particular need to complicate my life with another administration task.

I would see articles and posts every few weeks about how amazingly easy it LE was to set up, but chalked them off as a combination of hype and people less lazy than I am (I’ve been told it’s a virtue).

Then, yesterday, I discovered certbot.

Certbot is basically the old letsencrypt client (actually, it’s exactly the old client), except renamed and with a new PR campaign (and mascot). The project page made configuration look dead simple, so I decided to bite the bullet and try it.

In 5 minutes, I had an HTTPS-secured site with an A+ security report.

Here are the exact steps I took:

certbot-auto’s configuration was an absolute breeze - every step was extremely explicit (and validated!) to prevent user error. The curses-style interface used was probably one of the friendlier I’ve ever encountered.

Editing nginx’s configuration required a bit of research, but DigitalOcean had my back with a tutorial on my exact setup (substituting letsencrypt-auto for certbot-auto). I also went with their advice on generating a stronger (2048 bit) Diffie-Hellman group, which is the only additional step required for obtaining that highly-coveted A+ report. Ultimately, the configuration ended up looking like this (cruft removed):

From there, ensuring that the certificate remains updated is a single line in the system crontab:

I know I’m a bit late to the party when it comes to LE, but this is great news for the web and for pervasive encryption.

If you haven’t already looked into adding a Let’s Encrypt cert to your (unsecured) site, please do. It’s free (as in beer and freedom), dead simple (I’m really not exaggerating about the 5 minutes), and an easy way to make your part of the web more secure.