Thoughts on the "Universality" of Consciousness

In this post, I propose a model for analyzing consciousness, human or otherwise. I call it universality, which is going to get confusing if you’re used to the other one.

With that vague introduction out of the way, let’s jump right into it:

The universe, defined astronomically, is everything. It is matter (planets, stars, nebulae), it is energy (light, radiation, heat), it is great vastness, and it may or may not be expanding infinitely at speeds faster than the speed of light. The universe is also physics and nature itself — it is gravity, the speed of light itself, and the properties of subatomic particles that combine to produce the diverse properties of matter.

The universe is expanding, or was expanding at some point in its history.

To escape this, we think of the universe as edgeless and uncentered, “stretched” internally through the growth of spacetime itself (where forces permit) and quantifiable via Hubble’s Law. This, in turn, explains why all distant galaxies appear to be moving away from us.

This is the essence of universality. Universality is the universe’s most powerful weapon in defense of its own sovereignty: anything that can be defined in its terms becomes part of it.

Universality does not, however, mandate the existence of just one universe. Although our universe is edgeless by its own definition, we may think of it as having “edges” by a definition permanently unknown (and therefore extrauniversal). From there, we may imagine a field of universes not unlike an Apollonian gasket: 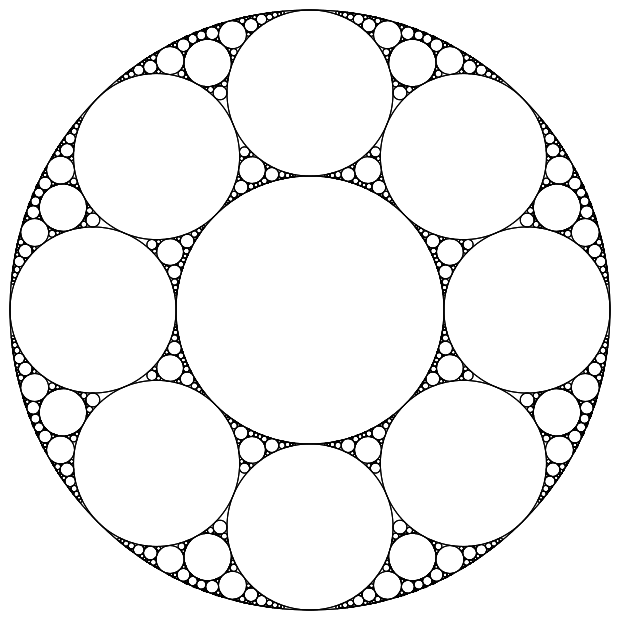 These Universes can be illustrated together, but none of them are able to observe their neighbors, much less their own borders. If one universe were to observe another universe, the two would cease to exist distinctly and a third new universe would arise with an “everything” that is the union of the “everything”s of its progenitors.

Combined, these rules form the philosophy of universality:

It is important to emphasize the gap between conceiving and understanding, as well as the standard of understandability for dimensional things:

As above, it is trivial to conceive extrauniversal things. I can conceive of a distance N + 1 outside of my universe’s observable end.

The standard of understandability requires only a rational placing-into-terms for inclusion in the universe. This does not, however, make absurd understandings valid. For example, I cannot avoid the standard by asserting that I understand N + 1 to be the color blue.

Demonstrating the Universality of Human Consciousness

All human individuals have consciousnesses (exempting the brain-dead or otherwise totally impaired). All humans conceive a set of things, and understand a set of things. These sets may overlap and vary.

Two humans may conceive the same thing. For example, two composers might both conceive of a new song. Even if they arrive at identical compositions independently, they cannot be said to have understood each other’s compositions — they are different people.

Even in rule-governed or elementary knowledge, there is no exception to unique understanding. Even if every human conceives the Pythagorean Theorem, no unique pair could ever be said to understand it equally.[1]

Humans are educated by others with concepts, and by themselves with understandings.

Applying the philosophy of universality to the human consciousness:

What does it mean for consciousnesses to interact?

Are human-human interactions governed by equality of conception?

If you are invested in the universality of consciousness, then the answer must be yes. Since consciousnesses cannot have the same understandings of things, their interactions must be governed by equality of concepts instead.

Are human-nonhuman interactions governed by inequality of conception?

Therefore, a stronger or more rigorous standard is required to derive meaning from human-nonhuman interactions within the universality model of consciousness.

Overall, I don’t think that I’ve exposed any radical new truths about consciousness here. In fact, I know that I haven’t.

[1] Although this assertion goes cleanly with the idea of universality of consciousness, it may seem unintuitive or impossible at face value. Although we all know the same formula for the Pythagorean theorem, consider how two people asked independently to explain it might choose to do so. Independently and in isolation, no two people will provide the exact same understanding (verbally or otherwise).

[2] This might be stretching the point too far, but I think that a device that allows cats to speak is not really such a device. Instead, it’s an organ for a new organism (a cat with human speech).