Writing and publishing a Python module in Rust

This post is a quick walkthrough of how I wrote a Python library, procmaps, in nothing but Rust. It uses PyO3 for the bindings and maturin to manage the build (as well as produce manylinux1-compatible wheels).

The code is, of course, available on GitHub, and can be installed directly with a modern Python (3.5+) via pip1 without a local Rust install:

All it does is parse “maps” files, best known for their presence under procfs on Linux3, into a list of Map objects. Each Map, in turn, contains the basic attributes of the mapped memory region.

By their Python attributes:

Critically: apart from the imports and the os.getpid() call, all of the code above calls directly into compiled Rust.

The motivations behind procmaps are twofold.

First: I do program analysis and instrumentation research at my day job. Time and time again, I need to obtain information about the memory layout of a program that I’m instrumenting (or would like to instrument). This almost always means opening /proc/<pid>/maps, writing an ad-hoc parser, getting the field(s) I want, and then getting on with my life.

Doing this over and over again has made me realize that it’s an ideal task for a small, self-contained Rust library:

Second: I started learning Rust about a year ago, and have been looking for new challenges in it. Interoperating with another language (especially one with radically different memory semantics, like Python) is an obvious choice.

The procmaps module is a plain old Rust crate. Really.

The only differences are in the Cargo.toml:

(Other settings under package.metadata.maturin are available for e.g. managing Python-side dependencies, but procmaps doesn’t need them. More details are available here.)

In terms of code, the crate is structured like a normal Rust library. PyO3 only requires a few pieces of sugar to promote everything into Python-land:

Python modules are created by decorating a Rust function with #[pymodule].

This function then uses the functions of the PyModule argument that it takes to load the module’s functions and classes.

For example, here is the Python-visible procmaps module in its entirety:

Module level functions are trivial to create: they’re just normal Rust functions, marked with #[pyfunction]. They’re loaded into modules via add_wrapped + wrap_pyfunction!, as seen above. Alternatively, they can be created within a module definition (i.e., nested within the #[pymodule]) function via the #[pyfn] decorator.

Python-visible functions return a PyResult<T>, where T implements IntoPy<PyObject>. PyO3 helpfully provides an implementation of this trait for many core types; a full table is here. This includes Option<T>, making it painless to turn Rust-level functions that return Options into Python-level functions that can return None.

procmaps doesn’t make use of them, but PyO3 also supports variadic arguments and keyword arguments. Details on those are available here.

Here’s a trivial Python-exposed function that does integer division, returning None if division by zero is requested:

Classes are loaded into modules via the add_class function, as seen in the module definition.

Just like modules, they’re managed almost entirely behind a single decorator, this time on a Rust struct. Here is the entirety of the procmaps.Map class definition:

procmaps doesn’t need them, but trivial getters and setters can be added to the members of a class with #[pyo3(get, set)]. For example, the following creates a Point class:

…for which the following would be possible in Python:

Using #[pyclass] on Foo auto-implements IntoPy<PyObject> for Foo, making it easy to return your custom classes from any function (as above) or member method (as below).

…allows for the following:

By default, PyO3 forbids the creation of Rust-defined classes within Python code. To allow their creation, just add a function with the #[new] attribute to the #[pymethods] impl block. This creates a __new__ Python method rather than __init__; PyO3 doesn’t support the latter5.

For example, here’s a constructor for the contrived Point class above:

As mentioned above, (most) Python-visible functions and methods return PyResult<T>.

The Err half of PyResult is PyErr, and these values get propagated as Python exceptions. The pyo3::exceptions module contains structures that parallel the standard Python exceptions, each of which provides a py_err(String) function to produce an appropriate PyErr.

Creating a brand new Python-level exception takes a single line with the create_exception! macro. Here’s how procmaps creates a procmaps.ParseError exception that inherits from the standard Python Exception class:

Similarly, marshalling Rust Error types into PyErrs is as simple as impl std::convert::From<ErrorType> for PyErr.

Here’s how procmaps turns some of its errors into standard Python IOErrors and others into the custom procmaps.ParseError exception:

With everything above, cargo build just works — it produces a Python-loadable shared object.

Unfortunately, it does it using the cdylib naming convention, meaning that cargo build for procmaps produces libprocmaps.so, rather than one of the naming conventions that Python knows how to look for when searching $PYTHONPATH6.

This is where maturin comes in: once installed, a single maturin build in the crate root puts an appropriately named pip-compatible wheel in target/wheels.

It gets even better: maturin develop will install the compiled module directly into the current virtual environment, making local development as simple as:

procmaps has a handy Makefile that wraps all of that; running the compiled module locally is a single make develop away.

Distribution is slightly more involved: maturin develop builds wheels that are compatible with the local machine, but further restrictions on symbol versions and linkages are required to ensure that a binary wheel runs on a large variety of Linux versions and distributions7.

Compliance with these constraints is normally enforced in one of two ways:

Distribution with maturin takes the latter approach: the maturin developers have derived a Rust build container from the PyPa’s standard manylinux container, making fully compatible builds (again, from the crate root) as simple as:

This command, like a normal maturin build, drops the compiled wheel(s) into target/wheels. Because it runs inside of the standard manylinux container, it can and does automatically build wheels for a wide variety of Python versions (Python 3.5 through 3.8, as of writing).

From here, distribution to PyPI is as simple as twine upload target/wheels/* or maturin publish. procmaps currently uses the former, as releases are handled via GitHub Actions using the PyPA’s excellent gh-action-pypi-publish action.

Voilá: a Python module, written completely in Rust, that can be installed on the vast majority of Linux distributions with absolutely no dependencies on Rust itself. Even the non-maturin metadata in Cargo.toml is propagated correctly! 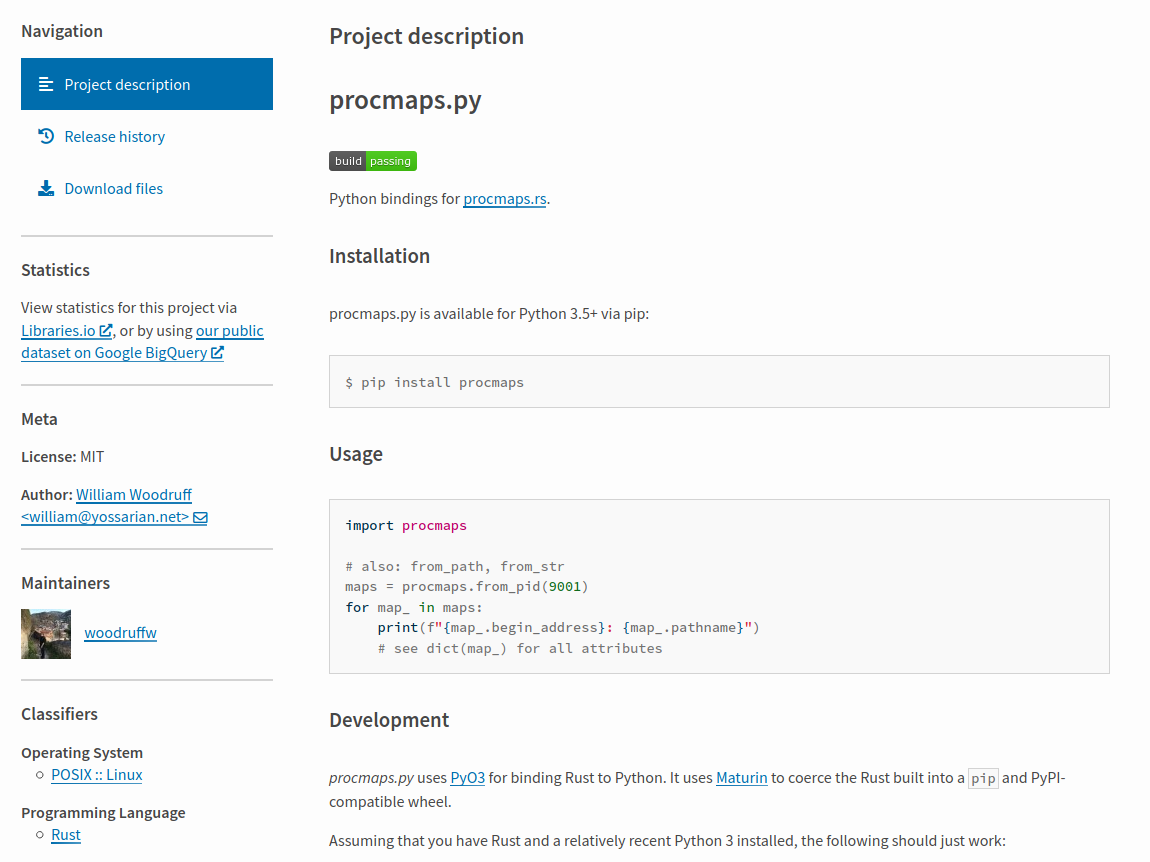 I only ran into one small hiccup while working on procmaps — I tried to add a Map.__contains__ method to allow for inclusion checks with the in protocol, e.g.:

…but this didn’t work, for whatever reason, despite working when called manually:

There’s probably a reasonable explanation for this in the Python data model that I haven’t figured out. Edit: a Redditor pointed me to the correct approach. I’ve cut a new release of procmaps that shows the __contains__ protocol in action.

By and large, the process of writing a Python module in Rust was extremely pleasant — I didn’t have to write a single line of Python (or even Python-specific configuration) until I wanted to add unit tests. Both pyO3 and maturin are incredibly polished, and the PyPA’s efforts to provide manylinux build environments made compatible builds a breeze.