Tl;DR: I went ahead and wrote a pure-Rust implementation of Skipjack this past weekend. You can find it on GitHub as skipjack.rs and on Cargo as skipjack.

Skipjack (or SKIPJACK) is a block cipher, best known for its use in the NSA’s Clipper chip. It was officially declassified in 1998, although its design appears to have begun in the late 1980s and was stabilized by 19931.

There’s a decent amount of technical and historical information about Skipjack online already, but here are the interesting bits:

I had the following goals for my Rust implementation:

It turned out that #1 was relatively easy — despite a decent amount of technical documentation on Skipjack’s design, actual implementations appear to be relatively scarce. After finishing, the primary ones appear to be an “optimized” version in C originally by Panu Rissanen in 1998 (here’s one copy, but many variants are available online) and a few toy and educational implementations. This old NIST document lists validated implementations, but nothing that’s likely to be readily available online.

To accomplish #2, I needed a specification of Skipjack that I could understand and follow. Fortunately, NIST provides one in their “Skipjack and KEA Algorithm Specifications” from 1998. The linked PDF was created from scans, making it annoying to copy the F-table from — someone was kind enough to transcribe it back into text here.

Skipjack’s structure is remarkably simple: there are two main rules (A and B), each of which applies the permutation rule G. G in turn integrates bytes from the secret key (“cryptovariable” in NIST’s terminology) via a lookup into F, which is a fixed 1-1 table on Page 8 of the specification. Each rule also integrates the current counter (which begins at 1 when encrypting, and at 32 when decrypting) as it mixes the input block.

The rules for A and B (and A' and B', for decryption) are specified as: 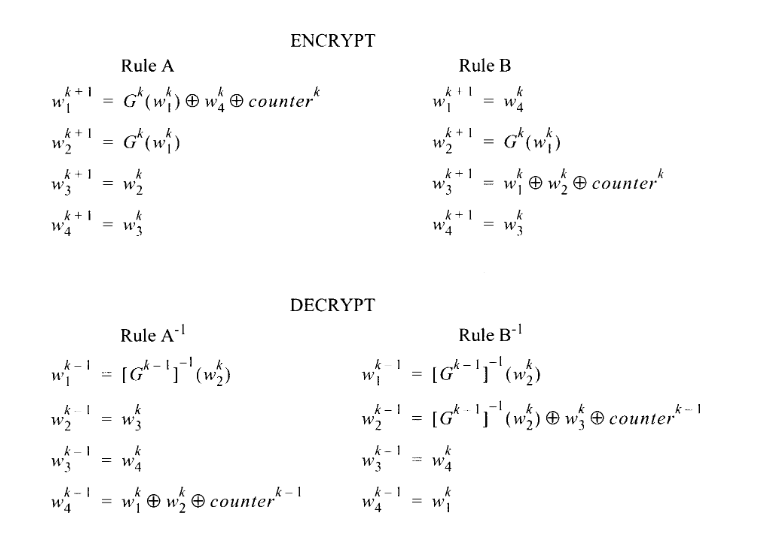 NIST provides a key for all of this syntax, but in essence: each rule operates on the individual “words” of the input block, where each word is 16 bits. Each superscript indicates the “step number”, indicating that step k + 1 takes the values produced by k as its inputs. With rule A as an example:

The specification also provides each rule in a schematic format, although I personally find them a little harder to interpret:

The permutation rule G is also relatively straightforward. It operates on a single word, subdividing into bytes g1 and g2, which eventually become g5 and g6 via a four-round Feistel structure:

g3 becomes the XOR of g1 and a byte of table F, where the index into F is determined by the XOR of g2 and the 4kth byte of the secret key (mod 10, since the key is only 10 bytes), where k is the step number.

…and similarly for g4 and onwards. This has the effect of mixing each sub-round of G into the next, along with 4 bytes of secret key.

(Both rule_g and rule_a are copied directly from skipjack.rs’s source. You can also find rule_b and the inverse rules in it!)

The schematics for G and G' are a little more obvious, thanks to the linear re-integration of each previous round’s output: 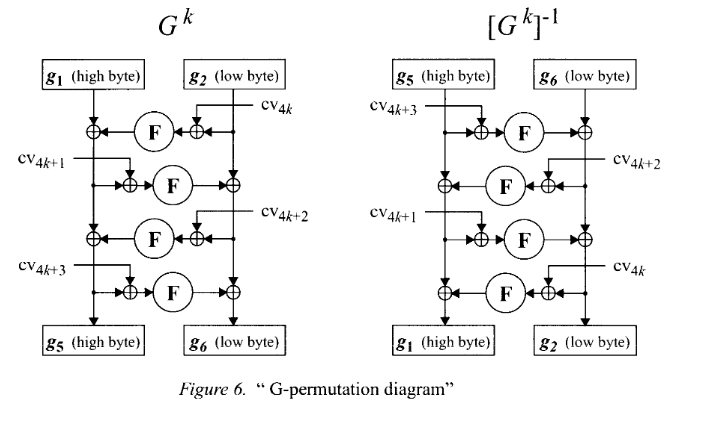 All told, skipjack.rs is only 375 lines of Rust, including all comments and unit tests. With comments and test lines removed, the actual Skipjack implementation becomes just 165 lines. That could further be reduced by replacing the 64 literal calls to rule_a, rule_a_inv, &c with trivially inlinable loops, e.g.:

All told, Skipjack took me about 8 hours to implement. That’s a lot less time than I expected, given that:

Implementing Skipjack was a nice reminder that the concepts behind block ciphers are not especially difficult, and can be easily implemented with a little bit of tolerance for jargon. It was also a nice reminder of how treacherous that feeling of ease can be in cryptographic contexts — my understanding of the why of Skipjack’s internals is still superficial3, and my choice of language (vs. C/C++) is probably the only thing keeping my implementation from being full of subtle cross-platform bugs.

In the same vein as above: I’ve been writing C for about a decade, and have felt “comfortable” doing bitwise operations (meaning that I can do them without reference) for about 7 years. “Comfortable” is in scare-quotes there because doing bitmath in Rust feels like a totally different beast — I don’t have the background anxieties that I carry from C, and I trust that my operations will perform consistently across different platforms, word sizes &c.

Before writing skipjack.rs, my intuition around straight-line code had been that it was a constraint, something that I’d have to consciously aspire to in a context where I’d want or need it.

It was surprising, then, to realize that I had written my Skipjack implementation with absolutely no loops or branches from the very beginning and without intending to. This makes perfect sense in retrospect (Skipjack itself has a fixed number of rounds, and the rest is just mathematical operations and lookups), but it wasn’t an intuition I had before.