This will be a brief post on using libopcodes to disassemble a raw (i.e., not in object format) buffer of machine code. The examples will all be for AMD64, but libopcodes should work with most bfd_arch_* and bfd_mach_*-specified machines.

For the unfamiliar, libopcodes is a part of the GNU binutils. Coupled with libbfd for object format parsing, it provides the core disassembly functionality used by tools like objdump.

It’s also very old (the header in my dis-asm.h credits Cygnus Support and dates to 1993) and barely documented: outside of header file comments, the only real reference for it is this random page from 2009 on someone’s self-hosted Wiki. opdis and xdisasm appear to use libopcodes, but both also (appear) to be unmaintained. 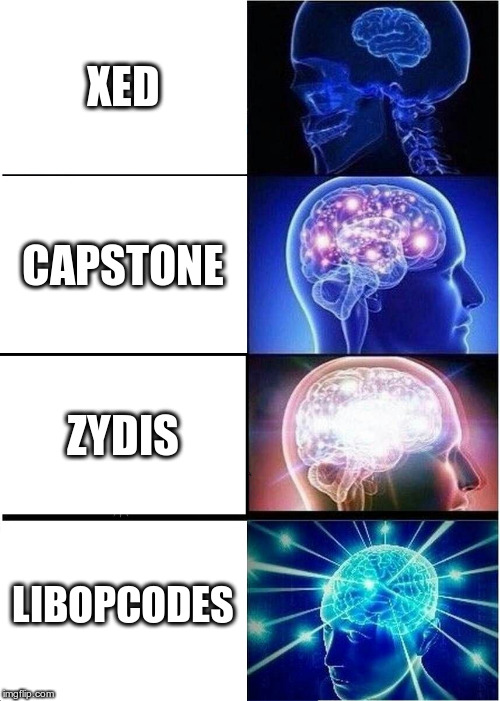 Honestly, there aren’t very many good reasons to use libopcodes: Intel’s XED is almost certainly more correct, Capstone has a pretty nice API (including decent Python bindings), and Zydis boasts performance and no dependencies as project goals. LLVM also provides disassembler functionality via the MC subproject; Ray Wang has a great blog post on using it.

However, sometimes you just need to do something a particular way. In this case, I needed to use libopcodes. Since there were no other decent resources on it, I figured I’d share what I’ve learned.

To BFD or not to BFD

libopcodes uses many of libbfd’s constants, but can also be populated with a bfd * directly.

This post is not going to cover usage with a BFD handle, since libbfd doesn’t do anything for us when disassembling raw bytes directly from an in-memory buffer.

Seeing how we’re using libopcodes, you’ll need to have it installed.

On Debian and Ubuntu, apt install binutils-dev will fetch everything for you.

The syntax for linking to libopcodes is identical to every other library: just pass -lopcodes to your linker.

All code samples below assume that dis-asm.h is included.

disassembler_ftype is a typedef‘d function pointer, which the user creates and then calls to disassemble a single instruction. dis-asm.h provides some forward declarations for predefined disassembler_ftypes as print_insn_*, but neglects to publicly expose the internal AMD64 disassembler_ftype. As such, we’ll need to construct it ourselves.

Creating a new disassemble_info is a multi-step process:

We’ll replace stdout and fprintf above with our own stream and function in the full example at the end of the post, so that we can capture the disassembly instead of outputting it directly.

Confusingly, init_disassemble_info is not enough to fully initialize our disassemble_info structure. We also need to fill in some fields manually, and call a separate initialization function:

Observe that we set disasm_info.buffer_vma to 0 — you can change that to whatever you want your starting VMA to be. Just make sure to do your address relocations correctly.

Finally, we call one last function:

Our disassemble_info is now ready for use.

As mentioned above, disassembler_ftype is actually a typedef‘d function pointer, one that we will actually call post-creation to disassemble our buffer instruction-by-instruction.

libopcodes provides a disassembler function that returns a suitable function:

disasm can now be called.

After a successful call, the buffer specified in disasm_info.buffer should contain a string representation of the disassembled instruction. Note that no newline is appended; it’s up to the programmer to ensure that the buffer is human-formatted between calls.

Putting it all together

Here’s how we can disassemble a raw buffer into a string of assembly:

Which, when compiled and run:

The above covers the very basics of using libopcode, but there’s a lot of other stuff you can do via disassemble_info: