After years of keeping it in a mostly disabled state (and clearing it out whenever I had to reactivate it), I’ve finally permanently deleted my Facebook account.

I made my account in 2009. Throughout middle and high school, it was probably my main gateway to the larger Internet (in the form of shared links). I had several hundred “friends” on the service, but only around two dozen that I talked to (either regularly or irregularly).

This post is a brief breakdown of what I’ve found in the archive that I downloaded before deleting my account.

One of the first things I noticed when I opened the archive was the “Ads” page, which included these lists: 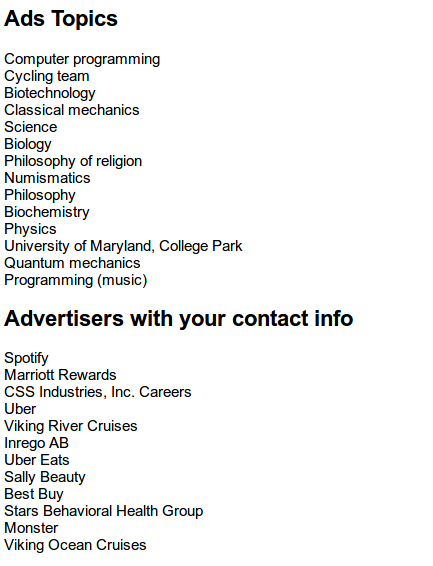 The topic spread is a little confusing: I am indeed interested in programming, philosophy, and cycling, but “Classical mechanics” and “Programming (music)”? My best guess for numismatics is a brief coin-collecting phase in high school.

More interesting is the list of advertisers who have my information. Considering that I was under 18 for the majority of my (activated) Facebook account’s existence, I’m not sure why Marriott (a major US hotel chain) or Inrego (a Swedish IT company?) would want my information. Similarly for Sally Beauty (which appears to be a Texas-based beauty supply company) and Stars Behavioral Health Group (a social services company in Long Beach?) — my guess is that these were random sales. I’ve also never been on a cruise ship (and never plan to), so it’s funny to see that both the ocean and river components of Viking Cruises want my business. Uber, Spotify, and Monster make some sense, although I haven’t drank a can of Monster since high school.

Overall, Facebook’s profile of me seems to be hit-and-miss: they’ve accurately recorded some of my interests, but have mixed them with a healthy dose of noise. Similarly for advertisers: I’ve never been to Long Beach, Texas, or Sweden, but do use Spotify (and did use Uber, once).

Not even Facebook is safe from UNIX timestamp mistakes.

I’m guessing that the example count refers to the number of image samples that contained a recognizable copy of my face. I’m almost certain that I uploaded more than 36 photos of myself to Facebook over the years, so this count might only be after I turned 18.

The archive also contains every photo and video I’ve ever uploaded, all of my posts (and posts by others on my wall), and every private message I’ve ever sent. My friends list is present, including each friend’s email address(es) and phone number(s).

For obvious reasons, I won’t be sharing any of that. However, it’s interesting to see how much I’ve been given about other people in my archive — I was expecting just names and content, not contact information. It’s also interesting to see content that I wasn’t even aware existed — the archive contains pictures and videos from 2009-10 that didn’t show up in my photo or video albums.

After a little under a decade of usage (half of which daily), it’s hard to say whether Facebook has me figured out. That being said, the archive I downloaded is entirely public-facing — I have no idea what my full/real advertising profile looks like.