Keybase on the CI

Update (5/16/18): Much of the information below is now obsolete, thanks to the new keybase oneshot command. keybase help oneshot has all of the details, and you can find an example of it in use here.

This is a post-mortem analysis of my work on getting the Keybase client running on Travis CI.

Hopefully it will help the half dozen other people running Keybase in a CI setting.

I maintain an open source secret manager, KBSecret, that uses Keybase and the Keybase filesystem (KBFS) for encryption and synchronization.

KBSecret is written in Ruby and interacts with Keybase through a collection of unofficial libraries I wrote.

It exposes both a public API (in Ruby, of course) and a well-featured CLI via the kbsecret command. Both the API and CLI have unit tests to prevent regressions and provide a semi-rigorous specification of the overall program.

First problem: testing at all

Since KBSecret integrates tightly with Keybase and KBFS, its unit tests need to make several assumptions about the test host in order to do any meaningful testing:

As a developer testing on my own system, these are mostly reasonable assumptions to make. I can automate the suspension of my own (real) KBSecret state, and I certainly have Keybase and KBFS running.

However, I really like farming out the work of testing to a CI service — CIs make it impossible to forget to run your tests,1 and they give new contributors immediate and automated feedback on their changes. Auto-generated coverage reports are also nice, as they provide a metric for the project’s overall health.

My first approach to running the KBSecret tests on a CI was to abandon Keybase entirely, and attempt to stub a subset of Keybase functionality2. At a high level, the stubbing looked like this:

I completed my first version of this on August 1, and you can see the changes here.

Thus, there were two ways to run the unit tests:

Both of these were placed under the make test target, to prevent me from accidentally introducing changes that broke one or the other while developing locally. Meanwhile, the .travis.yml file only contained the second invocation.

The stubbing setup actually worked pretty well for a while, despite its hackiness. With the exception of a few changes caused by ongoing development, it required no maintenance or afterthought. It was also fast, with test and coverage results across two separate machines taking just over a minute on average to complete.

Everything was dandy…until I wanted to add the CLI tests to the CI. I quickly realized that continuing with the stubbing approach would require considerable effort — I would have to mock a great deal of Keybase and KBFS behavior (like user and team validation), and layer on even more require muckery to avoid throwing exceptions due to the process barrier between the keybase command and its subcommands. The result would be a half-functional Keybase mock that still wouldn’t cover the corners needed to test the CLI satisfactorily.

Second solution: Keybase on the CI

Given the problems with testing the CI above, I decided to throw my stubbing approach out entirely and try running the real Keybase client on the CI.

Can the Keybase client even run on a headless machine? Some quick searches confirmed that it could.

Installing the client turned out to be relatively easy:

run_keybase then starts the Keybase service and KBFS daemon correctly, and we’re left with the task of automating the log-in process. This is where it gets tricky.

Keybase’s CLI is heavily interactive — most commands prompt the user for input, and assume that the user is on a TTY. ANSI colors and effects abound.

None of that is bad (it actually makes keybase very pleasant to use), but it poses a challenge when trying to automate things like keybase login and keybase deprovision (more on those below).

I spent a lot of time fiddling with different ways to do interactive automation, but I ended up going with good old expect and autoexpect for automatic generation:

This ended up working way better than I any right to expect (no pun intended). You can see the generated scripts (with some manual parameterization and fixups) here and here. Note the KBSECRETCI_PASSWORD environment variable — that contains the account’s password, and was configured directly in Travis.

Keybase keeps track of the list of “provisioned” devices associated with an account. When a new device (like, say, a new CI instance) sends a log-in request, an existing device must be used to (interactively!) confirm the validity of the request and provision the new device. This is great for security, but awful for automation.

There are two exceptions to these requirements: the first device on a Keybase account, and provisioning via a “paperkey” device.

The first device exception is what I tried first: by provisioning the CI instance as the device and them deprovisioning it once the tests ended, I could functionally avoid the device confirmation step indefinitely. In order to prevent multiple CI test jobs from competing to become the “first” device (and thereby clobbering each other), I also had to configure Travis to only run one job at once.

This worked really well for a while:

…and then broke fabulously: 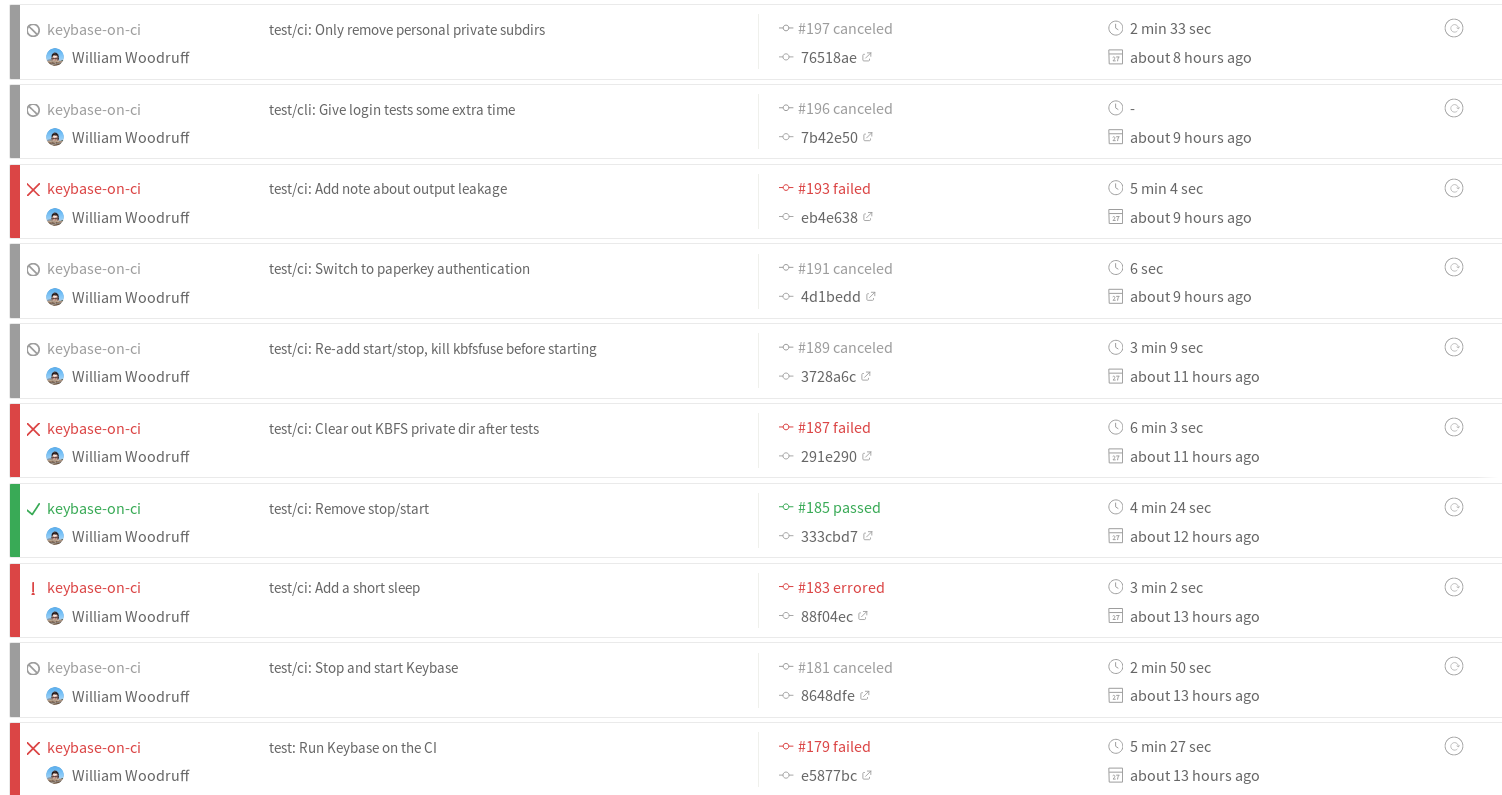 I still don’t know fully why this approach started failing (I have some guesses involving PGP keys and some persistent bad state), but it did so in myriad ways:

Since repeatedly provisioning and deprovisioning just one “first” device on the account wasn’t reliable, I switched to the other exception to the device confirmation rule: paperkeys.

Keybase paperkeys are a lot like normal cryptographic paperkeys, except that they’re human-readable (rather than just machine readable). They also function as devices, allowing a user to authenticate new devices by selecting their paperkey from the device list and typing it in. That means we can use one to provision our CI instances!

Just as with the passkey method, we’ll keep the CI limited to one job at a time and still deprovision the device at the end of the run. This prevents the list of devices presented during keybase login from growing indefinitely, which in turn keeps the expect script for the paperkey method relatively simple:

We also (experientially) need to give keybase some time to start up, so the whole setup process for Keybase on Travis looks something like this:

(Note the redirection of expect’s output, since paperkeys get echoed by keybase login, unlike passphrases.)

Hacky, but now we have real Keybase working reliably on a headless CI!

With both API and CLI tests: 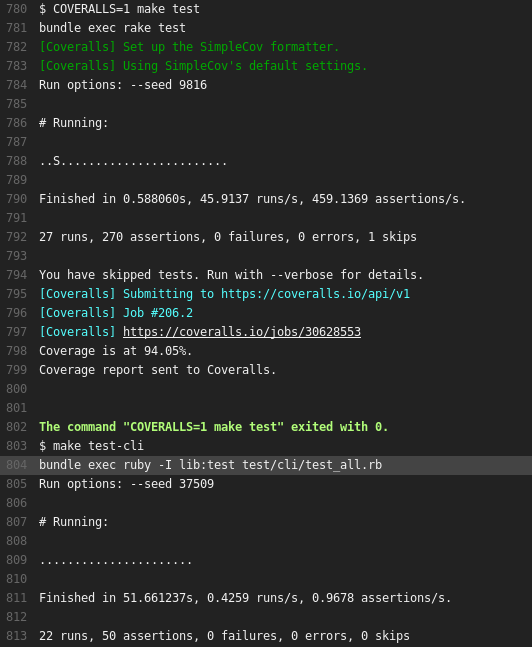 This post was pretty scatterbrained, so I’ll just list everything you need to replicate my setup down here: