Preword: I’ve created the new “devblog” tag for posts like these, since I want to distinguish them from my more general posts about programming. My hope is to make semi-regular updates about my work.

I’ve been working on KBSecret on an on-again, off-again basis since April 16th, which is when I wrote the last kbsecret-related blog post.

Here are some of the changes:

I’ve also been fiddling around with external utilities: kbsecret-yad-login is a replacement for kbsecret-zen-login that uses yad instead of zenity to build the dialog.

This gave me the flexibility to add a combobox for the session to save to: 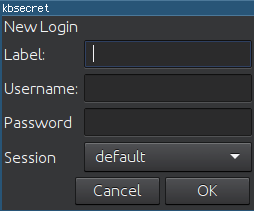