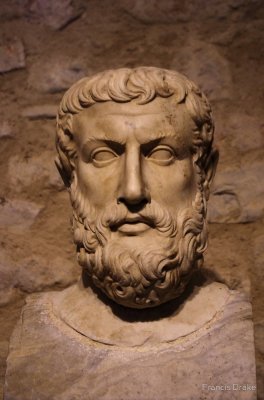 Parmenides is best remembered for his argument against the possibility of change.

Although he wasn’t the first of the Monists, he is certainly among the more influential: his ideas have persisted in scientific and popular thought via Zeno of Elea, his disciple, whose eponymous paradoxes are still used to introduce concepts of series, harmonics, and the infinitesimal.

One interpretation of Parmenides’ argument is as follows:

Implicit in this interpretation is that ‘coming to be’ amounts to all change.

Aristotle interprets and rebuts Parmenides’ argument in Physics I.2-3, 184b15-187a10 and does so in a way that I think is pretty satisfactory.

However, I’d like to tackle a slightly different question.

If we accept change, is the absence of change (i.e., stasis) possible?

First, there are two ways in which ‘stasis’ can be used:

We will analyze each of these usages.

The first sense can be taken to mean something like ‘static’: despite appearances, reality (‘whole’ or ‘being’ to Parmenides) does not undergo change.

To me, this meaning is not so interesting — it’s widely (universally?) accepted that constant change is at the heart of physical processes, and that scientific knowledge is the basis for this belief.

It’s also clear that Parmenides doesn’t mean anything close to this sense of stasis: taken so broadly, anything observed at separate points can be said to have changed.

Instead, Parmenides likely means that reality is one thing and substance, rather than many things of different substances composed together. Since reality certainly is and that which is cannot come from nothing, reality is unchanging.

There is another and potentially more interesting sense in which the question can be considered: interpretation. Consider the following:

Two friends have lunch and part ways, knowing that they will see each other the next day. Upon meeting a day later, have they changed?

There is an obvious sense in which they have each changed: each has slept differently, woken differently, and practiced their respective jobs prior to today’s lunch. Each has new and unique experience, as well as composition.

Together as friends, however, it is harder to say that they have changed. After all, neither has interacted with the other since their last lunch together, and neither has experienced anything that bears upon their friendship.

There are problems with this, best elucidated by another example:

It seems clearer (than with the example of the friends) that a change in the interesting sense has occurred here. It is, moreover, perfectly plausible that the change in the admirer has no origin other than stasis itself — it is not that they have discovered a new statue to admire, but that repeatedly (and solely) visiting the same statue has changed the way they admire art as a whole.

It is equally plausible to think that the admirer could find their love for art diminished by repeatedly viewing the same sculpture, even if that is what they desire.

I think this is the most difficult example to reason about. It is clear that neither the individual words nor the phrase structure have changed. If written down, the two would be indistinguishable.

It is clear, then, that interpretation and reckoning about a thing play a role in whether we say they are changing or unchanging.

I set out to write a semi-long post on how stasis is impossible, and not just in the physical sense. I ended up writing a medium-length post and not expressing myself particularly well.

The claim that stasis is impossible still feels like the right one to me, although the first example I presented convincingly rebuts it. I’ll probably write a follow-up post to flush these ideas out more.