Decoding the MetroCard, Part 2: Research and Past Attempts

Preword: This post has been sitting on my hard drive for over a year. According to the original date on the file I intended to publish it on 6/26/15, or two days after Part 1. I probably shelved it because I didn’t like the format or wasn’t happy with the writing, but I’ve been asked to post it.

This is Part 2 in a series of posts on the MetroCard.

Part 1 provides a brief history of NYC’s Subways and the unique circumstances behind the creation of and the infrastructure behind the MetroCard system, if you’re interested in that.

Beginning on my quest to decode the MetroCard, I came across a fair number of previous attempts with varying degrees of success:

Run by “Kyurius”, this was the first site I came across. Although Kyurius didn’t have any luck actually decoding a MetroCard’s tracks, his site has a few useful points and hypotheses:

Most importantly, Kyurius mentions two other potential sources of information: HOPE (a semiannual hacker conference in NYC), and a 2600 NYC meeting in which MetroCards were discussed. More on those in a bit.

Another site I came across, last updated in 1999 according to its footer, is an information page on the MetroCard written by Daniel Convissor. Most of the information on it is public or common knowledge, but there are a few interesting facts under the ‘How MetroCards Work’ section:

The process by which the card works each time it is used to pay a fare, in approximated order:

Abbreviated, annotated, and emphasized from the original text.

This was the presentation that Kyurius referenced on their page.

A video from the presentation is still available on YouTube, but finding the actual slides themselves took a fair bit of digging. I eventually found them on a decade-old CCC page (22C3, in particular).

Despite being over a decade old, these slides (and accompanying 2600 articles) still represent the best publicly-available research on the MetroCard format. Joseph Battaglia’s research is meticulous, documenting everything from relevant patents, to the standard hardware used in a MetroCard Vending Machine (MVM), to the field offsets on each magnetic track on the card. He even goes as far as to provide examples of MVM receipts for analysis of serial numbers and location IDs: 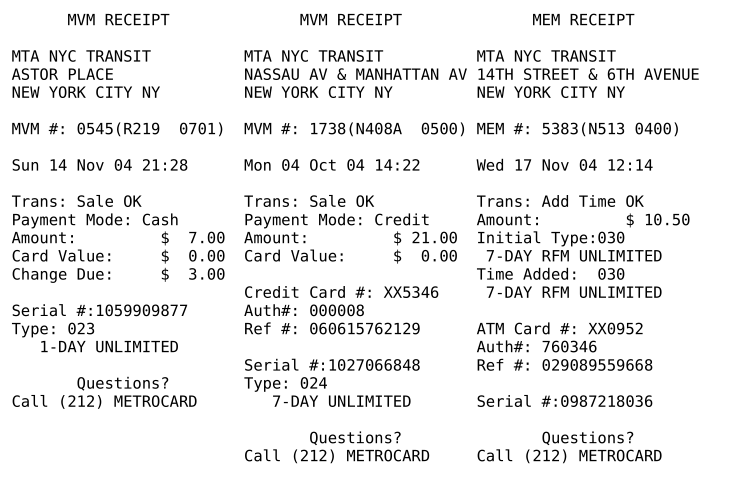 Battaglia also developed some proof-of-concept programs for the customized card reader he built, which can be found in the Spring 2005 issue of 2600 (and online here). There’s simply too much information for me to repeat in this post, so you should really read his articles and slides for the details.

While researching the MetroCard format itself, I came across a few tangentially interesting resources:

Since most of the research referenced above comes from abandoned (or at least unmaintained) pages, I’ve saved it for future reference. You can download an archive here.

This only leaves one final part in the series - my work on decoding the MetroCard. Since it took me a year to publish this part, I’m hesitant to make any promises about when it’ll appear. That being said, I (finally) got my magnetic stripe reader/writer a few months ago and will hopefully be putting it to good use soon.